Bishop Gorman’s offense will be a huge hurdle for the Cedar Hill Longhorns to overcome in our Game of the Week matchup. The Gaels are strong in nearly every facet of the game offensively, and shutting them down will be a task and a half for the Longhorns.

Bishop Gorman At A Glance 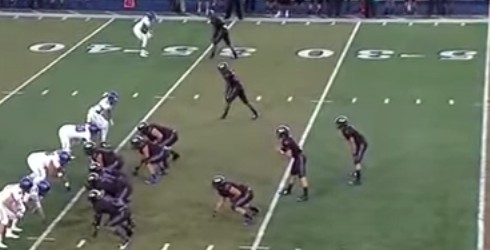 The Gaels look like a spread team, but they have some powerful running in the A gaps.

Bishop Gorman is going to throw a mix of run and pass at Cedar Hill.

For a long time, people thought that the Baylor Bears were an Air Raid team, throwing the ball all over the place. Anyone who watched the Baylor Bears could tell you that the Air Raid theory was definitely not true. Baylor attempts to punish you on the ground with tight splits on the offensive line, H-Backs, and multiple TE sets.

Bishop Gorman is exactly the same. We see Tate Martell and Tyjon Lindsey and just assume that they’re throwing it every single down. That couldn’t be further from the truth. The Gaels don’t run to set up the pass, or pass to set up the run. They use both as a duality, hitting deep passes out of multiple TE sets and long runs out of spread-trips formations. They can do any portion of their game out of any formation they choose, making them especially hard to predict.

Tate Martell is a dual-edged sword.

Let’s be very clear here: Martell is a good quarterback. He can throw the ball well and run when he has to. The only problem with Martell is sometimes he runs when he doesn’t have to, or tries to force balls into windows that are rapidly closing.

That might fly against teams that don’t have Texas speed, but it likely won’t fly against Cedar Hill. I’m not bold enough to predict two or three interceptions from Martell, but if the Longhorns pressure him hard enough, he will make ill-advised decisions at some point.

The Gaels will need to defend the edges of the tackle box hard.

If the Gaels are going to keep Martell upright and out of trouble, they’ll need to find a way to deal with the quickness of Cedar Hill’s outside linebackers. This could mean more protection in the pocket, allowing Tyjon Lindsey to work with more space, or it could mean quick throws or screens, both of which will offset the aggression of a blitzing defense.

If last year’s game against Lancaster is any indication, the Gaels are going to throw some misdirection/screen plays at Cedar Hill to try and offset some of the speed the Longhorns are sure to throw at them. The Gaels love their third and long screens, and with Ali-Walsh at running back, they convert a fair amount of them.

Ali-Walsh is a combination of acceleration and sneaky amounts of power. When he gets going, he gets going quick, and it’s hard to slow him down. The Longhorns are going to have to play very disciplined on third downs, because Bishop Gorman has the tools and the scheme to convert a lot of them.

If there’s one way to slow down a team with a lot of speed on defense, it’s start hitting the read-option early and often. With the combination of Martell and Ali-Walsh, the Gaels certainly have the capability to do so. Their offensive linemen aren’t bad either, they’re quick enough to provide protection on rollouts and strong enough to bulldoze holes for running backs in the A gaps.

Cedar Hill needs to find a way to declare quickly when the H-Back comes in the game.

The pivotal man in Bishop Gorman’s running game is their H-Back lead blocker. You can be almost certain that he’s going to be leading Ali-Walsh wherever he goes, and Cedar Hill would be wise to declare to him.

There’s one easy way they can do this. The Longhorns run a 3-4, making it easy to declare different directions and always have an edge player. Cedar Hill can move the defensive end on the side with the H-Back into a “5” position outside the tackle, move the weak side defensive end into a “4-i” position inside the other tackle, and roll the weak side outside linebacker to the line of scrimmage to make sure that no misdirection plays catch the Longhorns by surprise.

It’s a quick fix, but I’d expect that outside linebacker to come creeping down to the line of scrimmage when the H-back is on the field.

The X-Factor will always be Tyjon Lindsey

The Gaels will move Tyjon Lindsey all over the field, using him on everything from jet sweeps, to screens, to fade routes. Calling him a jack of all trades is a misnomer, because that term implies that he’s pretty good at everything and a master of nothing.

On fade routes, Lindsey is masterful. The threat of him going vertical opens up the underneath routes for the Gaels, and they use them masterfully. If Bishop Gorman’s offense can be compared to Baylor’s, Tyjon Lindsey can be compared to Tavon Austin. The Gaels will definitely use him all over the field. If Cedar Hill can cover him with one person, this game gets easier. If they can’t, the difficulty factor multiplies exponentially.

Bishop Gorman’s offense doesn’t rely on many things going right, it relies on the defense making mistakes. If you declare for the run too hard, they’ll hit Tyjon Lindsey over the top. Declare too hard for the pass, they’ll pound the ball in the A gap. If you aim to blitz them, they’ll throw one of their patented screens on you.

Bishop Gorman is going to score. If you can contain them for a few quarters, it’s definitely possible to outscore them.