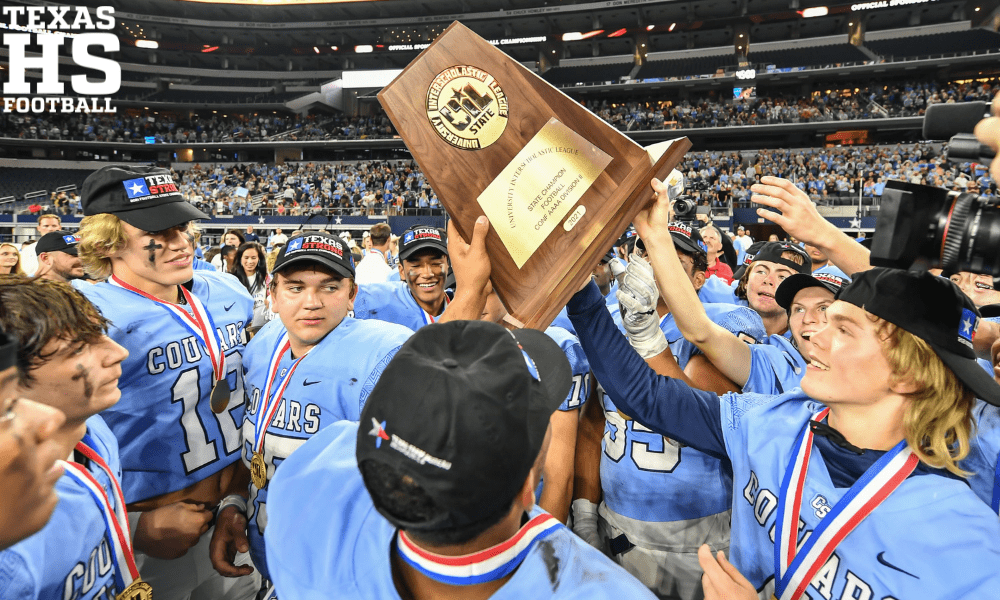 The China Spring Cougars (16-0) claimed their first state championship since 1978 with a 31-7 victory over the Gilmer Buckeyes (14-2) Friday night at AT&T Stadium.

The Buckeyes drove 58 yards on 18 plays, taking 7:06 off the clock.  That 18th play of the drive was a 4th and 9 from the China Spring 10.  Gilmer elects to attempt a 27 yard field goal, which clanks off the left upright.  China Spring holds and the game remains scoreless.

China Spring mounts their own long drive.  With a heavy dose of Major Bowden runs, the Cougars make it inside the redzone to the Buckeye 18.  After a three yard loss on a pass, and a 10 yard sack of Bowden, China Spring lines up for a 48 yard field goal attempt that falls short.

After two drives and 14:30 taken off the clock, the score remains 0-0.  The teams trade punts, then Gilmer starts a drive at their own 39.  A quick six play drive, with three plays gaining over 10 yards, nets the Buckeyes a touchdown and the lead.  RB Ashton Haynes rushes in from two yards out.

China Spring answers on the ensuing drive.  QB Major Bowden caps a 10 play, 61 yard drive with a 3 yard touchdown run.  These two heavyweights have traded blows, and with 1:57 remaining in the half, the score is tied 7-7.

With under two minutes left in the half, Gilmer attempts to move quickly down the field.  QB Brandon Tennison works down the field with both his arm and legs.  After a 10 yard pass from Tennison to WR Rohan Fluellen, with time running out, Gilmer elects to clock the ball, stopping the clock with 0:06.  Had Gilmer used one of their two remaining time outs, they could have stopped the clock with at least 0:09, and an opportunity for two plays to get it in the endzone.

With 0:06 left on the clock, Gilmer lines up for a 22 yard field goal attempt.  China Spring DBs Jacob Mott and Gabe Watkins rush the kick from opposite sides of the line.  Mott is able to block the kick and Watkins picks it up at the 14 and races 86 yards for the touchdown as time expired in the half.

After a hard fought first half, with both defenses being worked harder than they have all year, China Spring not only gets the lead going into halftime, but the Cougars get a huge shot of adrenaline that they will carry with them into the second half.

The Cougars take the opening kick of the second half and cap a 10 play, 60 yard drive with a Thomas Barr 22 yard field goal.  The China Spring defense then comes on the field and controls the Buckeye offense.  The attacking Cougar defense only allows one first down for the entire second half.

Tennison is unable to find any comfort in the pocket.  DLs Greg Salazar and Keith Njemini often send the quarterback scrambling.  When Tennison is able to get a pass completed, the swarming defense led by DB Tre Hafford and LB Brayden Faulkner stop the Buckeye receivers for minimal gain.

Offensively for the Cougars in the second half, QB Major Bowden took control.  Bowden ended the night with 191 yards on 34 carries and three touchdowns.  When Bowden didn’t have the ball, and in the absence of RB Kyle Barton, RB Isaiah Williams carried the load.  Williams had 61 yards on the ground and 23 yards through the air to keep the Buckeye defense off balance.

All year, the mantra for the Cougars was “Won Not Done”.  Focus on going 1-0 that week, but know the job is not complete.

The job is now done.  The China Spring Cougars are State Champions.