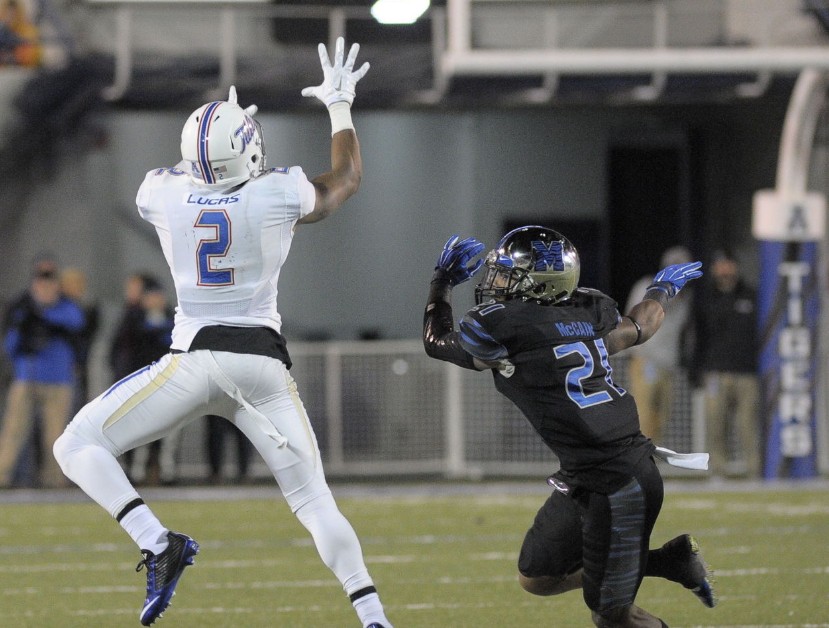 Keevan Lucas is the best wide receiver no one knows about, especially after overcoming an injury his junior year. The current senior broke out in his sophomore season, catching 101 passes for 1219 yards and 11 touchdowns. His stats took a dent in his junior season after an ACL injury sidelined him after just four games, but Lucas is back in 2016 and better than ever. Even after Tulsa lost prolific offensive coordinator Sterlin Gilbert to Texas, he just kept on rolling, and has caught 44 passes for 663 yards and 6 touchdowns through just 7 games.

Lucas stands a tall 5-10 and weighs in at around 200 pounds at any given day, but it’s his athleticism that’s made him a minor legend for the Golden Hurricanes.

Lucas is known for his tough running after the catch and never giving up on a play, concepts drilled into him in Abilene, where he grew up.

It’s easy to look at a 5’10 guy as athletic as Lucas and just assume that he’s got everything made. He’s on the Biletnikoff Award Watch List, he’s having a great season, and he’ll have a very real shot at making an NFL team in the spring. However, things weren’t always easy for him.

In September of 2009, Lucas lost his mother and grandmother; his mother to a brain aneurysm and his grandmother to a heart attack/stroke. After he broke a few records at Abilene High, his recruitment ended early after he suffered a season ending knee injury his senior year. He chose Tulsa, and Tulsa has embraced his work ethic and humility right back.

You can see the impact he has everywhere, but especially in recruiting. His brother, Keylon Stokes (who plays for Manvel), is a commit. Tulsa went out and secured Coy McMillon and Abram Smith of Abilene, partially based on the quality of player they received the last time they went out there. Lucas might have built an Abilene-Tulsa pipeline with his play.

When Lucas takes the field, it’s always more than a game. He always has his mother and grandmother looking down on him, and when he catches yet another touchdown, they’re definitely smiling.