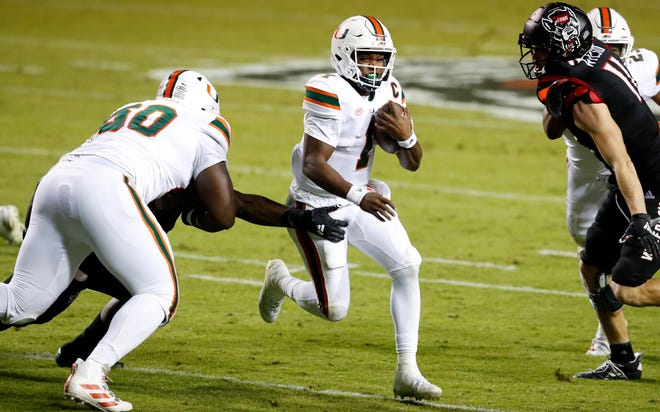 D’Eriq King helped the Miami Hurricanes scored the final 13 points of the game to hold off the North Carolina State Wolfpack 44-41 on Friday.

The former Manvel star completed 41 of 31 passes for 430 yards and four touchdowns to go with 105 yards on 15 carries in the road win.

Miami (6-1, 5-1 Atlantic Coast Conference) jumped back into the Top 10 in the latest Associated Press College Football Poll. The Hurricanes went from being ranked 11th to 9th after beating NC State (4-3, 4-3).

The Hurricanes trailed the Wolfpack 41-31 early in the fourth quarter before King led the team on three scoring drives to close out the contest.

He orchestrated scoring drives of 54 and 60 yards to set up Joe Borregales field goals from 38 and 22 yards out to cut into the NC State lead.

Miami took the lead on a five-play, 84-yard scoring drive that was capped by a 54-yard touchdown pass to Mike Harley with 68 seconds remaining. King got the Hurricanes to midfield with a 35-yard completion to Harley on that drive.

The Hurricanes trail Clemson (7-1, 6-1) by a half-game for second place in the conference with three games remaining.

King transferred to Miami after playing in at the University of Houston. He threw for 10,000 yards and 3,000 rushing yards at Manvel and earned District 22-6A MVP honors as a senior.