John Tyler And The Houston Cougars Are Becoming Symbiotic 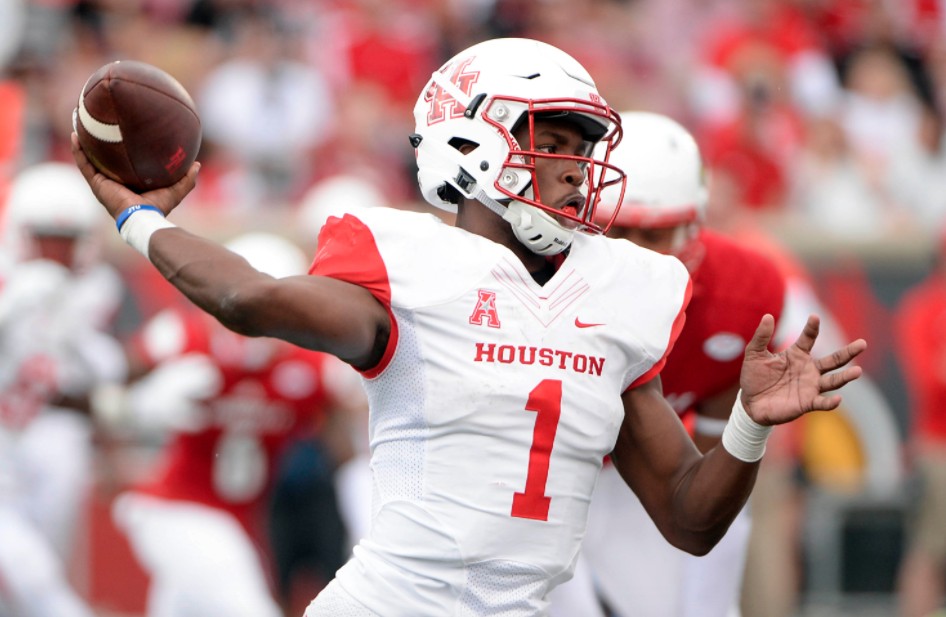 Share on Facebook Share
Share on TwitterTweet
Send email Mail
Photo via Jamie Rhodes, USA TODAY Sports
They haven’t won a Texas state title in the last eight seasons, but the John Tyler Lions have maintained success and produced impact players into the collegiate ranks.
The Houston Cougars have certainly capitalized on the Lions’ success as two of their finest players from John Tyler will be graduating this year in quarterback Greg Ward Jr. and outside linebacker Tyus Bowser. The two players helped the school go 22-5 over the last two seasons with wins over Florida State, Oklahoma, Louisville and Navy.
The Cougars hope to have similar success again by bringing in another John Tyler quarterback in Bryson Smith. Smith had similar production to Ward Jr at John Tyler. In 2015, Smith passed for 2,415 yards, 20 touchdown passes and six interceptions while rushing 182 times for 1,421 yards and 21 touchdowns. He had his best season as a senior in 2016 with 3,277 passing yards, 32 touchdowns and nine interceptions while running 179 times for 1,653 yards and 23 touchdowns. Smith may not be the quality passer Ward Jr. was, but he might be a better runner as he finished with 44 career rushing touchdowns. Smith played well when the game was on the line. He ran for 212 yards and four touchdowns as a junior in a playoff loss to Lake Ridge. In three playoff games as a senior, he averaged 138 rushing yards per game on just 51 carries with eight rushing touchdowns. It may be difficult for Smith to transition into a collegiate quarterback. If he can’t, he may find more success as a running back.
Ward Jr. was primarily a wide receiver as a sophomore at John Tyler and had 44 receptions for 528 yards and five touchdown receptions. He became a quarterback as a junior and passed for 3,596 yards, 32 touchdowns and five interceptions. He also ran for 1,212 rushing yards and 19 touchdowns. As a senior, his rushing numbers decreased to 861 yards and 13 touchdowns, but his passing numbers improved to 4,202 passing yards, 44 touchdown passes and five interceptions. He also saved his best game for last. In a semifinal game against Guyer, Ward Jr. completed 48 passes out of 65 attempts for 551 passing yards and five touchdown passes. He also ran for 109 rushing yards and a rushing touchdown. Ward Jr. completed his career with 76 touchdown passes, 10 interceptions, 32 rushing touchdowns and five touchdown catches. Now he has an opportunity to make the NFL.
Dereck Rush was hired at John Tyler in 2007 after a one-year stint in 2004 in which he went 2-8. The results weren’t much better as the team went 1-9 in ’07. But after a 3-17 record in his first two seasons, Rush started seeing improvements. The Lions went 6-6 record in 2008 with a playoff win over Shoemaker. The team finally broke through under Rush in 2009 with a 12-2 record and three playoff wins. They went 12-2 again in 2010 and won District 14 of 4A Region II and three playoff games. They won District 14 again in 2011 at 11-4 and reached the semifinals to lose to Midway.
The Lions made a couple of changes for 2012 by bringing in a new head coach in Ricklan Holmes and moving to District 16. Both moves helped John Tyler go 13-2 and win the district. They also had success in the playoffs, which ended in a close semifinal loss to Guyer.
John Tyler moved to 5A in 2014, went 12-3 with four playoff wins and got blown out 44-14 by Aledo in the semifinals. They went 11-2 in 2016 after moving to District 11 of 6A and won the district. The Lions beat Lufkin and Dallas Jesuit and lost to Klein Collins.
Brought to you by:

Smith will be a good quarterback for the Houston Cougars

Yes he will I know I’m his Mama. In any type situation he will thrive to always be the best and he will be a great QB w great coaches to COACH him