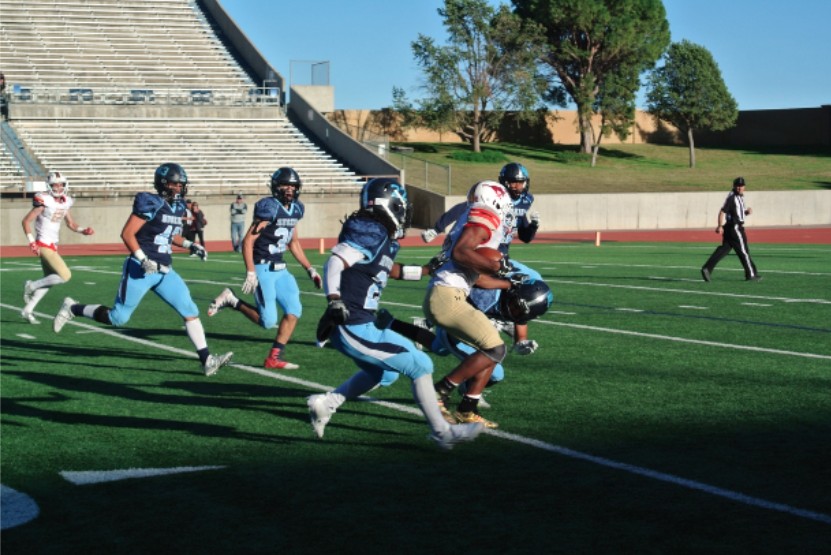 After a slow start on offense for Lubbock Coronado, Qua Gray and the Mustangs came up with big plays in the second half to pull away from the El Paso Chapin Huskies for a 31-14 win on gorgeous fall afternoon at Ratliff Stadium in Odessa.

“We came out and played harder in the second half,” said Coronado head coach Seth Parr, “We were able to open up the passing game a little bit even though we weren’t as crisp as we’d like to be.”

Early on, the Huskies controlled the clock but were unable to come away with points on their first drive. Lubbock Coronado struck first with a Chance Fair 20-yard field goal set up by a big 50-yard completion from Gray to Noah Sifrit as Sifrit wrestled the ball away from Chapin cornerback Rosario Hernandez.

After another Chapin punt, Coronado ground out an eight play drive capped off by an 8-yard pass from Gray to Cameron Stevenson for a 10-0 lead early in the second quarter. The Huskies then put together their best offensive drive thanks to two big plays: a reverse pass from Mondarius Johnson to Christian McKeever immediately followed by an 8-yard run by Matthew Zubiate to cut the Mustangs lead down 10-7. The Mustangs looked to tack on one more score before the half, but Rosario Hernandez picked off a Gray pass in the end zone to keep the score at 10-7.

The Mustangs went galloping out of the gate in the second half with a quick 31-yard touchdown drive from Gray to Sifrit. Chance Fair would recover his own onside kick and the Mustangs would march down the field and score again with a 6-yard Jarrod Compton run to make it 24-7. But, Chapin would not go away.

Gray fumbled the snap and was picked up by J’Marion McKnight at the Mustang 15-yard line. Chapin took advantage of the short field, as Anthony Baird delivered a strike to Ryan

Wilson on fourth down to make it 24-14 late in the third. But as the game went on, Chapin couldn’t quite get those big plays they needed to pull ahead.

“We just couldn’t get the ball in the end zone today,” Chapin head coach Rene Hernandez said, “It’s been a problem for us the last three weeks and we just couldn’t give our defense a rest. But we fought hard all season long and I’m really proud of this team.”

The Huskies had the ball and momentum to start the fourth quarter before Seth Wood intercepted a Baird pass that the Mustangs would convert for a 28-yard score from Gray to Chance Fair and essentially put the game away. Gray would finish with 289 yards passing for the game.

“It’s a great deal,” Parr said, “I’ve never made it this far in the playoffs and now we’ll get to play on Thanksgiving weekend against a Metroplex team. We have a chip on our shoulder and we want to show what a Lubbock team can do.”

With the win, Lubbock Coronado moves to 11-1 on the year and will play Colleyville Heritage in the regional round. Chapin ends their season at 9-3.