Preview: Ingleside Looks to Take Another Step Forward in 2022 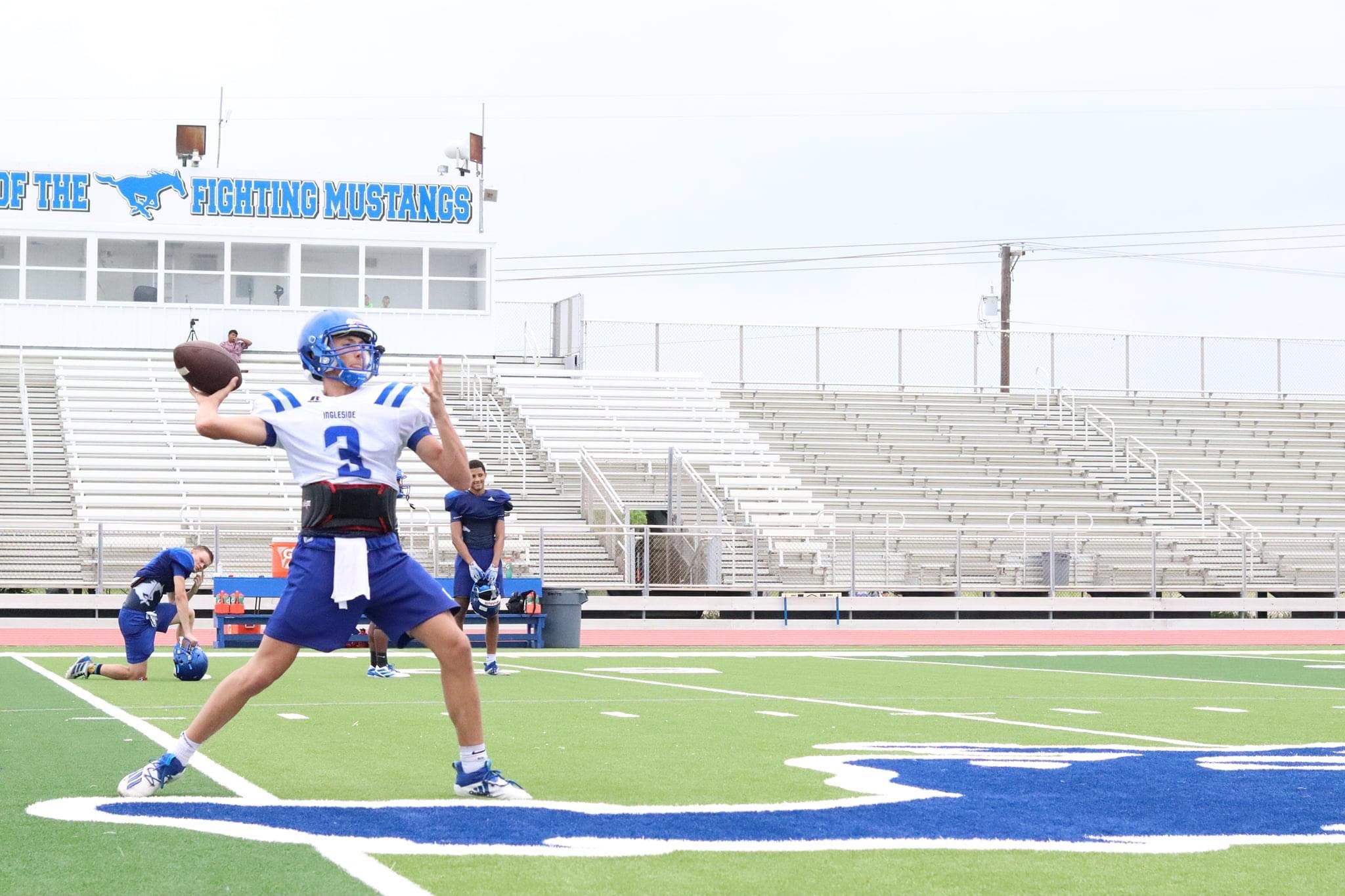 2017 was not a kind year to Ingleside and its football program.

The Mustangs were coming off an 0-10 season and didn’t have a full practice field as their new high school was being constructed on the field they had previously used.

Instead, they practiced in a 40-yard indoor facility while their JV practiced on the school’s discus ring right next to a street.

Day 2 of fish camp in the books and the turf is complete! Officially ready for two-a-days Monday! pic.twitter.com/4TNIrPeKnj

To make matters worse, Hurricane Harvey struck the town in August, delaying the start of the school year until late September.

We will rebuild. AD’s are meeting tomorrow to discuss options for returning to normal as soon as possible. Go Mustangs!! pic.twitter.com/ZQUBXgu9BL

Five years later, the Mustangs are in a much better place.

Ingleside has a new weight room, turf football, baseball, and softball fields, and its new high school building. And on the football field, the Mustangs have now made the playoffs three of the past four years.

“It was definitely an uphill battle that we were fighting all the way around there,” Hamrick said. “Now, you wouldn’t even recognize the place had you walked in with me in 2016. Everything’s pretty much brand new.”

…and the turf starts to go down! pic.twitter.com/u7AnmUanWB

Ingleside is coming off a 9-3 season, which included its first playoff victory in eight years when it knocked off Devine 31-27 in the bi-district round. And after Ingleside held off a furious fourth quarter Devine comeback, Hamrick was proud of his football team’s resolve.

“Last year, the push was to go and get a playoff game; get that one under our belt and get a win there,” Hamrick said. “In my early years being here, we just didn’t know how to win those football games. So just figuring that out at the right time, it’s a good deal.” 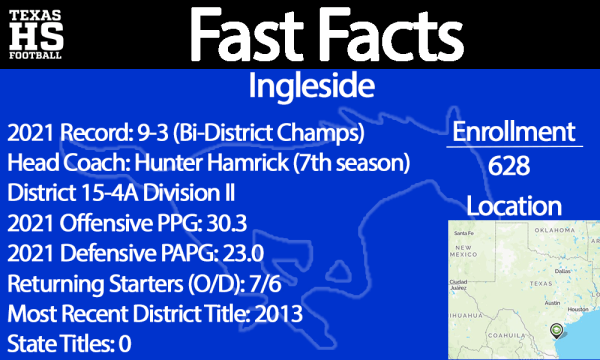 This season, the Mustangs have officially 13 starters back although Hamrick said more players than that have meaningful varsity experience.

Junior Aidan Jakobsohn returns behind center and brings some versatility to a Mustang offense that has been run heavy in the past out of its wing-T setup.

“He allowed us to show a little more balance last year,” Hamrick said. “We’ll be even more modernized this year, mixing in some shotgun and RPO stuff with him because he’s got it. He’s a bright kid. All you got to do is tell him once, and he grasps the concepts.”

Joining Jakobsohn is running back Leo Villarreal, a first team all-district selection last year, who played quarterback his sophomore year and is an all-around “natural athlete.”

Fullbacks also play a prominent role in the wing-T, and Hamrick said he is looking for Elijah Bell and Jorden Randall to both have an impact carrying the ball this season.

Two hundred forty pound tight end Eric Edison is a threat both as a run blocker and pass catcher, while impact wide receiver JC Smith is the “most athletic football player” on the Mustang roster this season.

Flipping sides of the ball, Hamrick has a bit of a jigsaw puzzle to do as he slots players in the voids created by Class of 2022 graduates.

The Mustangs have a couple of holes to fill on the defensive line, although Hamrick said Edison will play both ways to help. Seth Morgan, who moved to defensive line from linebacker late last season, will also play up front this season.

Behind them, Kaden Nelson is going to slide into the middle linebacker role after being the Mustangs’ second-leading tackler a year ago.

Smith also started a couple of games at free safety last year, but could end up playing corner for Ingleside this year.

Besides those players, Hamrick also said he has two players returning from torn ACLs that he hopes will be able to contribute this year. But after seeing his team pitch five first half shutouts a year ago, Hamrick is excited to see what his defensive group can do this year.

“Our defense is pretty darn solid,” Hamrick said. “We’re excited about that group. We did a lot of good things because of it last year.”

That pushes Cuero, La Grange, and Giddings among others into District 12-4A Division II in Region III, leaving Region IV (districts 13-16) much more wide open this season.

“A lot of new scenarios for teams in the Coastal Bend and The Valley [in Region IV],” Hamrick said. “We all have to be pretty excited about it. It’s a relatively small region number wise.  All of our district teams have to feel like they have a chance to make the playoffs and make a little bit of a run.”

Ingleside made it to the third round in back-to-back years in 2012 and 2013. And after seeing his team go 7-4 and 9-3 in the past two seasons, Hamrick believes his Mustang program could be on the verge of something special.

“You sit there and talk about 9-3 and 7-4, you get that taste in your mouth of you can do something great,” Hamrick said. “I think we’re trying to get used to possibly having some high expectations of our season. With those expectations, there’s always a high demand on producing. We’ve got to live with that and expect that, but the kids are doing good.”