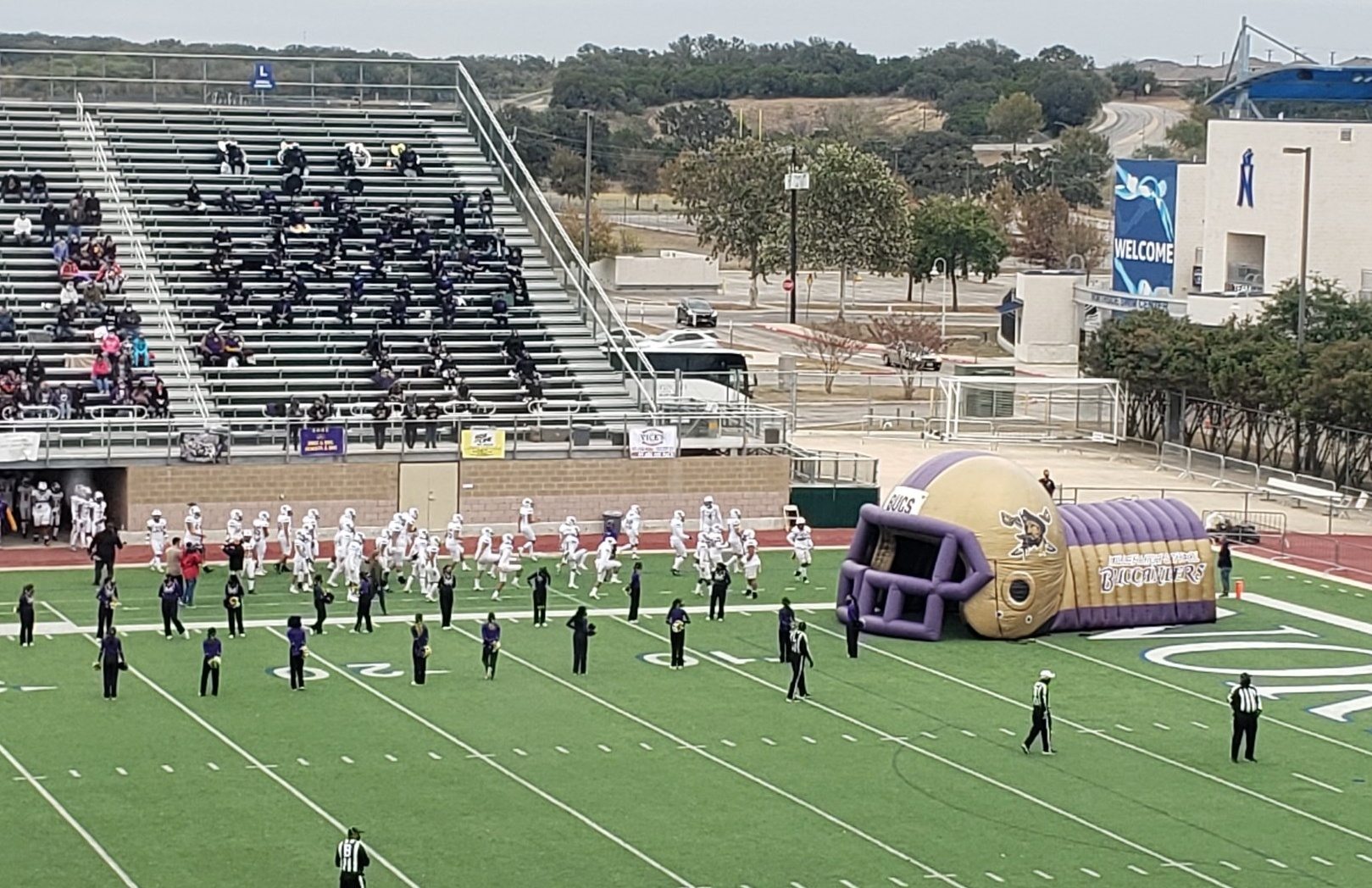 The last time Corpus Christi Miller played in 5A, the Buccaneers went 8-0 in district play and won their first district title in 18 years.

After two years away in 4A, the Buccaneers are back with the largest schools in the Coastal Bend in District 14-5A Division I. Miller head coach Justen Evans said his team is looking forward to the opportunity.

“We’re excited to be going back to the 5A district,” Evans said. “We definitely are excited to get back in the district with our local rival schools and renew those rivalries.” 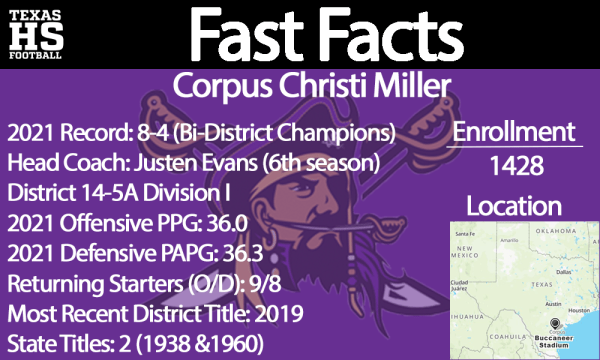 Evans has been a key face at Miller during his five-year tenure. When he first took over back in 2017, Miller had won just three games in the three previous years combined.

By Evans’ third season, in 2019, the Buccaneers clinched their first playoff berth in seven years and advanced to the third round of playoffs. The next year, they went one game further, making it all the way to the state quarterfinals.

And despite losing their starting quarterback Andrew Body to graduation after the 2020 season (he now plays at Texas Southern), Miller settled in sophomore Jaedyn Brown at quarterback in 2021 and still managed an 8-4 season with a bi-district championship in a 45-24 playoff victory over Hidalgo.

Evans said he was impressed with how his team performed with a sophomore quarterback and five freshmen starting on defense.

“I felt like we overachieved,” Evans said. “We knew that after losing the quarterback the year before, there was going to be a maturation process and some growing pains that goes with some of that stuff, so I was really pleased.”

After fighting through those growing pains, Miller is going to be a force to be reckoned with this season.

Brown (3,563 passing yards and 38 touchdowns) is back to lead the Buccaneers from behind center. However, senior receiver Lonnie Adkism will likely be the star of the show. He led the state with 1,860 receiving yards in 2020 and followed that feat up with 1,621 yards and 18 touchdowns in 2021. Currently, he has four Division I offers.

“Lonnie is a staple within our program, great kid,” Evans said. “He is everything that you want to coach in a kid. [He’s] humble. He’s the type of kid you love to be around, but when those lights come on and it’s time to play, he’s got something very special.”

The Buccaneers will also have three “athletic” starters back on the offensive line, according to Evans, while senior running back Ethan Greenwood (1,184 rushing yards and eight touchdowns) is also returning.

When it comes to new faces, rising sophomore quarterback Trevor Long will provide some competition for Brown, while speedster Broderick Taylor, a fellow sophomore, is expected to be a contributor for the Buccaneers after he rushed for 153 yards in two playoff games last year.

With all this talent, Evans is excited about the prospects for his team’s offense this season.

“We’re definitely excited about this,” Evans said. “This has the chance to be the most explosive offense I’ve had since I’ve been here just because of our depth.”

And while the offense will be capable of producing fireworks on any given night, Evans believes his team’s defense might be flying a little under the radar. Despite the fact Miller gave up 36 points per game a year ago, eight starters are back on a unit that was very young in 2021.

“Our defensive coordinator Eric John continues to do a phenomenal job on that side of the ball,” Evans said. “We played five freshmen on defense last year, and those kids were really good, they were just young. [The defense] has a good chance to be really good this year.”

Evans said linebacker will be a strength for his Miller team with senior Nic Nunez and sophomores Delson Cavaness, Jonah Stafford, and Lamarcus Cullum all returning at the position.

Up front, Evans expects junior defensive tackle Brayden Dennis to lead a line that will be “physical and disruptive.”

And don’t be surprised to see players like Adkism and Lister starring in the secondary as well as Miller makes a concerted effort to “put [its] best athletes and best players on the field defensively.”

With 17 total starters back and plenty of them still underclassmen, this Miller team could be one to watch coming out of the Coastal Bend for the next couple seasons.

But with all the young talent on the Miller roster, Evans has a message for his players loud and clear.

They need to stay humble because haven’t earned anything just yet.

“They’ve got to have a good summer because a lot of times, kids get caught up in everyone patting them on the back,” Evans said. “They need to understand that whatever we’re going to do, it’s going to be the work that they put in this summer.  But we’re excited for the season.”