Preview: With Experienced Roster, Happy has High Hopes for 2022 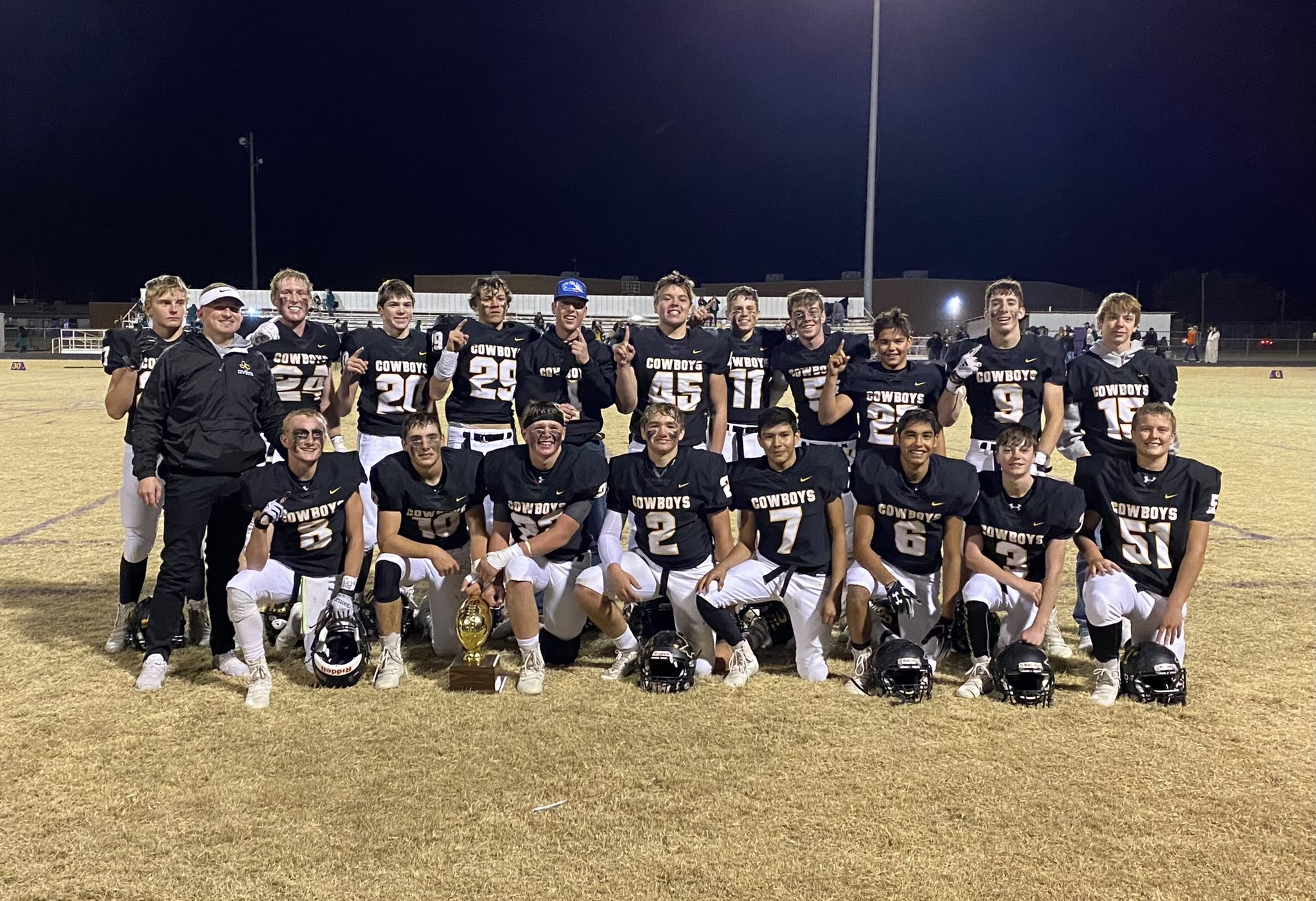 Thirty-five miles south of Amarillo, located off Interstate 27, is the small farming and ranching community of Happy, Texas (pop. 602). And in the town with the motto “The Town Without a Frown,” there is never any doubt where the locals will be on any given fall Friday night.

“We have a bunch of hard-working people,” Happy head coach Stacy Perryman said. “And they enjoy coming out and watching football on Friday nights. That’s a big part of their week.” 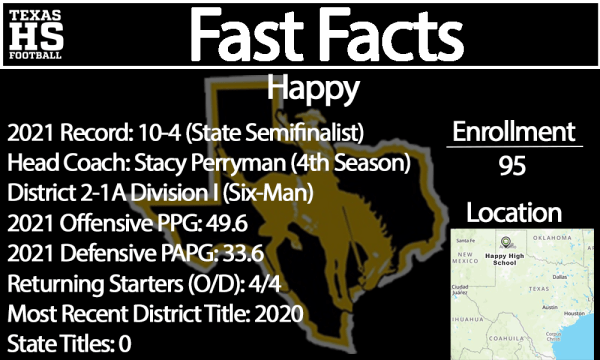 The Cowboys rewarded those committed fans with a memorable playoff run last season.

They started off the playoffs with a bang, shocking Region 1 favorites Springlake-Earth 48-44 in the first round on a touchdown pass from Camden Sperry to Kyton Johnson with just seven seconds left. That kicked off a wave of momentum the Cowboys rode all the way to the state semifinals where they were eventually knocked off by eventual state champions Westbrook 54-20.

Still, it was a 10-4 season and the Cowboys’ first state semifinal appearance since 2017.

The game winning TD for the Cowboys as they upset Springlake-Earth 48-44 in bi-district action. pic.twitter.com/A5rdSF5rND

“There’s always one team that just gets hot that, before the playoffs start, there’s not a lot of people looking at them, and that just happened to be us this (past) year,” Perryman said. “It was a fun ride, and our guys believed the whole time. They had confidence in themselves, and every week that went on, you know, that confidence grew.”

Since last fall, Happy’s players have competed in an array of other activities including basketball, tennis, golf, and UIL academic events. This summer, many will go off and get jobs or help out in agriculture.

Congratulations to the Happy Cowboys golf team who placed 2nd at the Region 1-1A golf tournament in Lubbock. They will now compete at the state tournament at the Plum Creek Golf Course in Austin May 9-10. Way to go gentlemen!! pic.twitter.com/hNRVc9L66X

Perryman said that versatility is just part of living in a small-town environment, but he knows his guys will be ready come football season.

“In the summer, these guys go off and they get jobs and they cowboy, and they do that all summer,” Perryman said. “And then when football season kicks off, that’s where our guys get locked in.”

Coming into last season, the Cowboys had some question marks offensively following the graduation of their all-time leading rusher Stetson Jameson.

However, quarterback Camden Sperry (1,753 passing yards and 41 touchdowns) stepped up in a big way and will be expected to lead the Cowboys again this season as a senior. Further boosting the offense is the return of Kyton Johnson (554 receiving yards and 12 touchdowns), the leading receiver for the Cowboys last year.

When it comes to the run game this year, the Cowboys have to replace over 1,400 yards of offense following the graduations of TS Bow and Pace Bressler. Perryman said he expects to give junior Cutter Hodges, who starred at linebacker last year, more reps out of the backfield this season.

On the flip side of the ball, Perryman said his team’s defense was one of the big reasons for their playoff run in 2021.

The defense should be just as strong this season as senior cornerbacks Jimmy Reyes (70 tackles) and Tryce Johnson (115 tackles and 5 INTs) return after earning all-state honors last season.

Up front, Perryman said Quay Hodges (85 tackles) will anchor the defensive line. Behind him, Joey Blackmon will look to step into the linebacker role vacated by TS Bow’s graduation as he moves up from JV this season.

The Cowboys will be glad to have the experience that comes with four starters returning on each side of the ball as they open their season against likely preseason number one Westbrook in the Jayton Gridiron Classic.

“[Jayton head coach Josh Stanaland] called me and said, ‘Hey, I’m thinking about putting you guys up in our premiere game on Saturday night against Westbrook,’” Perryman said. “And I told him, ‘If you think we’re worthy of that spot, we would love to play in it because our guys still have a sour taste in our mouth from the year before, and they would be fired up to get another shot at those guys.’”

Looking ahead to later in the season, district play will also look different for the Cowboys. They will compete against Nazareth, Wildorado, and Claude after being realigned to District 2-1A Division I for this season.

Perryman said he was happy with the realignment as the Cowboys won’t have to see Turkey Valley and White Deer until potential playoff matchups. However, while Claude and Wildorado will be competitive matchups for the Cowboys, Perryman said he has his eyes set on Happy’s showdown with Nazareth on October 21st as a game that could serve as a potential district title decider.

“Nazareth had their first-year head coach in [Tyler] Goodwin [in 2021]; they’re going to be a lot better this year,” Perryman said. “They only lost one senior I believe, so they’re definitely going to be the team that’s going to challenge us for a district title.”

But after last year, the district title is not the only title the Cowboys have their sights set on in 2022. With the talent the Cowboys have coming back, Perryman believes Happy has what it takes to go all the way to the state title game this fall for the first time in school history.

“We think that we’re good enough to get to the big game, so that’s one of our big goals,” Perryman said. “But in order to do that, we have to make sure we take care of business along the way, stay humble, know who we are, and stay true to who we are. We have to stay hungry.”