Another installment of this young rivalry takes place in Saginaw as undefeated powerhouses meet for the District 6-5A championship. The Pioneers are 9-0 for the first time since 1996 and have arguably the best quarterback in school history.

Sophomore Brayden Thomas has thrown for 2,161 yards and 28 touchdowns. He is the first player in Boswell history to throw for over 1,000 yards in a season. Brandon Chatman Jr. and Breshun Berry are his favorite targets, hitting both for 98 receptions and 18 touchdowns combined. With the passing attack that the Pioneers have, this could be the first time Boswell beats Aledo.

James Williams and the Bearcat defense will be working hard to keep Thomas at bay. The Montana State commit, alongside defensive end Colt Ellison, make up the the heart of the Aledo defense. The two have combined for 10.5 sacks on the season and appear to be in the backfield on every play. The Aledo pass rush could make it a long night for Brayden Thomas and the Boswell offensive line.

On the other side of the ball, the Bearcats is loaded with a dual running back system of Jase McClellan and Tre Owens. McClellan broke onto the scene with a stellar Freshman season. When he got hurt in the season opener it paved the way for Tre Owens. The two total for just over 1,000 yards rushing and 19 touchdowns.

The key to this game for Boswell is to slow down the Aledo pass rush and the running game. If Brayden Thomas has time to set and throw, Boswell should make this a good one. But it won’t mean anything if Aledo runs it up offensively.

Bosqueville looks to slow, stop one of UIL Class 2A’s most explosive offenses 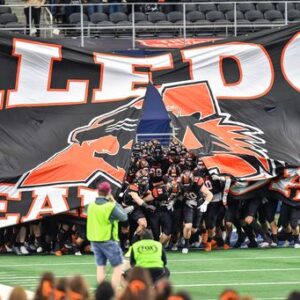