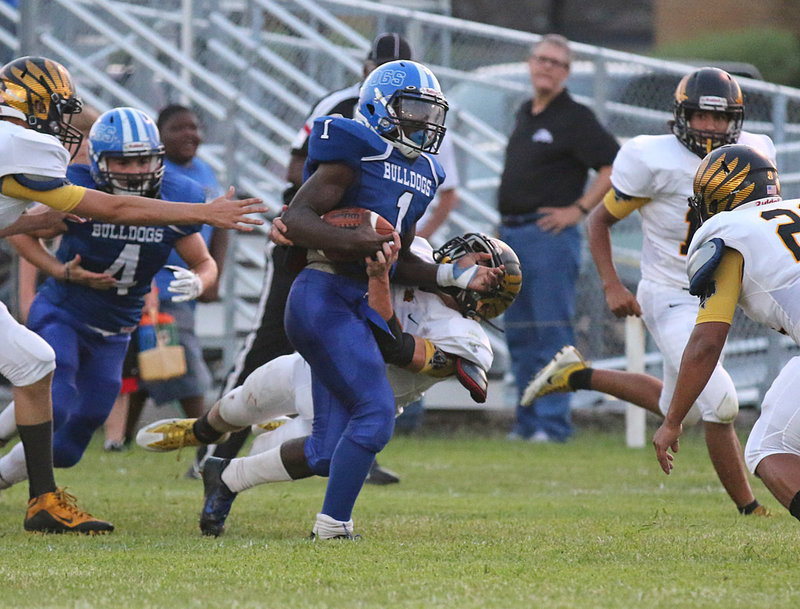 SPRINGTOWN, Texas — It seems nearly every season in six-man football is capped off with the football Titans that be Richland Springs. Not this year.

Richland Springs was denied an opportunity to play for its ninth state title in 2017. Milford earned a huge 62-16 second round victory — the first time the Coyotes were held to fewer than 20 points since 1998.

“The kids were on point and focused when it came to Richland Springs,” Milford coach Ronny Crumpton remarked. “They played with purpose that night, and they weren’t going to let that game get away from them.”

The win kept the Bulldogs unbeaten season going, just one of a few strong tests Milford was administered in 2017.

The season started out with a win over a dynamic Bryson team in a one-point nailbiter, a game Crumpton felt was important in paving the way for the successes of the season.

“We fumbled the ball too much in that game, but we went back to work the next week and corrected those things,” Crumpton said. “We knew things would be put into place as the season went on, but it opened our eyes to things we needed to work on.”

Milford’s season continued with more strong opponents, but more wins as well. The Bulldogs topped Jonesboro by 27 points the following week, and notched wins over an upstart Aquilla team, as well as a five-point victory over an always present Garden City squad.

“[Non-district] gets us ready for times like these,” Crumpton said. “It’s a good opportunity for us to play quality competition and test ourselves down the road. There were games that were going to be big, and test our character. We have ups and downs like everyone else, but we battled through things and banded together.”

The Bulldogs claimed the 15-1A DII title with a shutout over Trinidad followed by a 118-71 slugfest over Oakwood, and are through to the fourth round after topping a quickly improved Iredell team.

Milford’s offense is led by one of the more dynamic quarterbacks in the state with Ta’ron Smith. Smith lit up scoreboards across Central Texas with 44 touchdowns passing, 27 rushing, four receiving, and 3,795 total yards. Mind you, he’s still a junior.

“Everybody talks about Ta’ron, since he’s like the field general,” Crumpton noted. “But there’s so many weapons around him. We’re pretty even running and throwing the ball. The offense has slowly evolved, and I’m pleased with it.”

The Bulldog defense is just as potent. Three players have recorded more than 100 total tackles on the season, led by Corbin Schrotke’s 180. Smith also contributes a good amount of defensive play, with 89 tackles, two fumble recoveries and an interception.

“The defense, they just hang in there and make plays,” Crumpton boasted. “When their backs are against the wall, they usually come up big.”

Milford will need another strong outing from the unit to keep their season going when it take on Strawn’s explosive offense. Like their opposing offense, the Greyhounds currently average 61.7 points per game against quality opponents of their own.

“The offense is basically run by our center,” Strawn coach Dewaine Lee said. “[Gavin Duncan] does a tremendous job blocking. The line has done really well, they’ve been the big key.”

Strawn’s season began at the 14th annual Hico Six-Man Super Saturday with a 66-20 win over Abbott, with their success continuing from there. The Greyhounds earned three shutouts in the non-district portion, and held rival Gordon to just six. Strawn then claimed the 11-1A DII title, shutting out two of three opponents.

“We had a few kids with experience coming back,” Lee said. “A year of maturity was a big thing, it was big for us to get rolling.”

Two more shutouts were pitched in the postseason, including one to a strong Crowell team.

“Kids are focusing more on the importance of the playoffs,” Lee remarked. “We’ve found where they needed to be, and the kids have improved; they’re believing and understanding things.”

“We know they’ll be physical,” Crumpton said of their next opponent. “Just like everyone else, they’ll line up and try to come right at us. They just attack and put pressure on people, we have to be prepared for that.”

Lee had a lot to say of Smith, proclaiming him one of the best. At least, the best he’s seen.

“Milford has one of the best players I’ve seen in a long time,” proclaimed Lee of Smith. “They’ve been coached very well and they play hard. I’ve been really impressed with how they’re doing things. Been real impressed with them overall, we’ll have to prepare ourselves.”