Neighbors Tascosa and Amarillo squared off in their annual crosstown showdown this past Friday. Amarillo won last year’s edition 36-33 and looked to be well on its way to another victory up 20-0 at halftime. That assumption looked further secure when receiver Davin Lemmons opened the second half with a bang by returning the opening kickoff 96 yards for a score. Slowly but surely though, Tascosa began to chip away at the deficit.

First, Tascosa running back Major Everhart raced away for a 20-yard touchdown run before quarterback B.T. Daniel hit Darius Sanders on a beauty of a pass over two Amarillo defenders for a 35-yard score. Suddenly the deficit was only 27-14 with eight minutes still to play in the third quarter. Two and a half minutes into the fourth, Everhart struck again, finding the end zone from five yards out to cut the Amarillo lead to 27-21. It was a common theme in the fourth quarter as Tascosa drew ever closer to a stunning come-from-behind victory.

On the ensuing possession, Everhart delivered the biggest blow of the night to Amarillo as he faked a pitch before turning back around and scampering away for a 47-yard touchdown run right through the gut of the Amarillo defense to put Tascosa up for the first time on the night by a score of 28-27 with just over six minutes to go. Then, after a forced turnover by the Tascosa defense, it was Everhart yet again who helped ice the clock and secure the victory for Tascosa in one of the most memorable editions of this rivalry game.

Everhart finished the night with 247 rushing yards on 21 carries and three touchdowns. With Everhart and Tascosa’s triple-option offense hitting its stride, defensive coordinators will certainly be wary of this dynamic rushing attack produced by this vaunted offense. 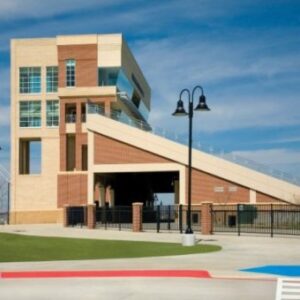