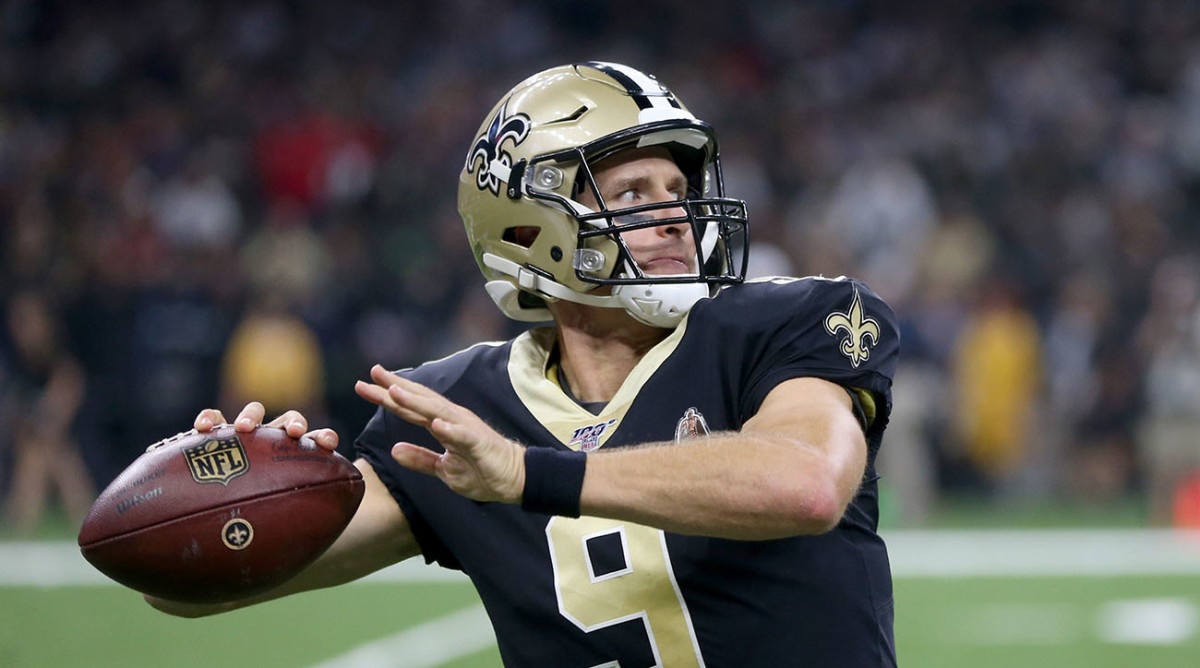 When we asked on social media who is the best QB ever from Texas, Drew Brees was mentioned by far the most.  Out of all active players that played high school football in Texas, he has had by far the best NFL Career.

Brees was born on January 15, 1979 in Dallas Texas.  He comes from an athletic family.  His dad played basketball for the Texas A&M Aggies and his mom was an all-state high school athlete in three sports.  His Uncle was an All-American Texas Longhorns Quarterback, and his grandfather is the third all-time winningest coach in Texas high school football history.  His brother is athletic too, having played college baseball for Baylor.

Brees did not play tackle football until high school.  As a star in baseball, football, and basketball at Austin Westlake, Brees had been focused on playing college basketball and did have offers.  Brees blew out his knee in his junior year in high school, which closed a lot of college scholarship offers.

Brees wanted to play for the Texas Longhorns or Texas A&M Aggies, but he was not recruited.  Instead, he’d go to Purdue to play for coach Joe Tiller, where he’d have one of the all-time great college quarterback careers.  He led Pursue to their first Big Ten Championship since 1967.  He won the Maxwell Award for the top college player.  He set 2 Purdue records, 13 Big Ten records, and 19 pursue records.

Brees was drafted by the San Diego Chargers as the first pick of the second round.  He was the backup to Doug Flutie his first year but started his second season.  Brees struggled his first two seasons, but had a great 2004 season.  He made his first Pro Bowl and led the Chargers to winning the AFC West for the first time in 10 seasons.  The next year, he played on a one year deal, with Phillip Rivers having been drafted the year before.  There was a QB controversy, but Brees started.  However, in the last game of the season, he suffered a shoulder surgery that needed surgery and the Chargers decided Rivers would be their quarterback of the future.

In 2006, Drew Brees became a free agent.  He was rumored to be signing with the Miami Dolphins, but they went with Duante Culpepper instead.  Brees ending up with the New Orleans Saints, and the rest is history.

Brees led the city of New Orleans back after the devastation of Hurricane Katrina.  His financial support as well as leadership was key to the city recovering.  Then, in the 2019-20 season, he led the Saints to a Super Bowl XLIV win over the Indianapolis Colts.

Brees is the NFL’s all-time leader in passing yards with 79,034 at the time of this article, nearly 3,000 yards ahead of Tom Brady. He will be the first QB to surpass 80,000 yards.  He is currently #2 in passing touchdowns, 1 behind Tom Brady with 558.   He is third all-time in passer rating, behind Aaron Rodgers and Russell Wilson.  He is the all-time leader in both pass attempts and completions.  Brees has one Super Bowl win and Super Bowl MVP (Super Bowl XLIV).  He has made 13 Pro Bowls and was 1 First-Team All-Pro.  He has led the league in passing yards 7 times and passing touchdowns 4 times.   He has 4 of the top 10 all-time most passing yards seasons.