After completing their non-conference slate of Eastern Washington, Arizona State and Houston, Texas Tech begins Big 12 play against Oklahoma State, one of the favorites to win the conference in 2017. According to our season preview and predictions for the Red Raiders to this point, they would be entering the game with a 1-2 record.

If Oklahoma State is as good as many expect them to be, they’ll likely head into Lubbock at 4-0, including wins over Pittsburgh and TCU. If they have two wins against Power 5 competition and Texas Tech’s sole victory is over an FCS opponent, the Cowboys should enter the game as heavy favorites.

The last two contests between Tech and Oklahoma State have been competitive shootouts. In 2015, the Red Raiders stormed out to a 17-point first half lead as underdogs to the No. 12 ranked Cowboys. Despite ultimately losing 70-53, the final deficit was inflated by a last second pick six as Texas Tech tried to throw down field in the last few seconds. Last season, Texas Tech trailed 45-38 with under two minutes left to play. They scored a touchdown but missed the extra point, falling 45-44 to the No. 13 ranked Pokes.

Both offenses field teams that can score year in and year out, indicating 2017 might be yet another shootout. Though Tech is overmatched and the underdog yet again, they may be able to stay competitive at home if the offense is up to the task. Then again, if they don’t respond well to starting the season 1-2, Oklahoma State could run them off out of the stadium if Tech isn’t prepared.

The matchup to watch in this game is Oklahoma State quarterback Mason Rudolph against the Texas Tech pass rush and secondary. The Red Raiders will start the season with newcomers Vaughnte Dorsey at safety and Octavius Morgan at corner in the defensive backfield. The corner spot opposite Morgan will be up for grabs in fall camp and the position battle could spill into the season. If a fresh face winds up the starter for game four, that could be three new red Raiders in the secondary.

No defensive player on Tech’s roster heading into 2017 recorded more than one sack in 2016. Pressuring the opposing quarterback will be a major point of emphasis for the Red Raiders this season.

If Texas Tech fails to pressure Rudolph into some bad throws, and the secondary fails to take advantage of errant passes, Oklahoma State will probably win comfortably. If Tech can wipe the slate clean from a disappointing non-conference performance and do those two things well, it may just stand a chance. If Oklahoma State wants to contend for a Big 12 championship, this is the kind of game they should be expected to win relatively easily. 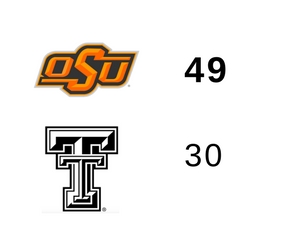 2017 Preview — Hallettsville’s Path To State Is Paved In Red

Jamal Adams: “Perfect Place To Die” Would Be On Football Field