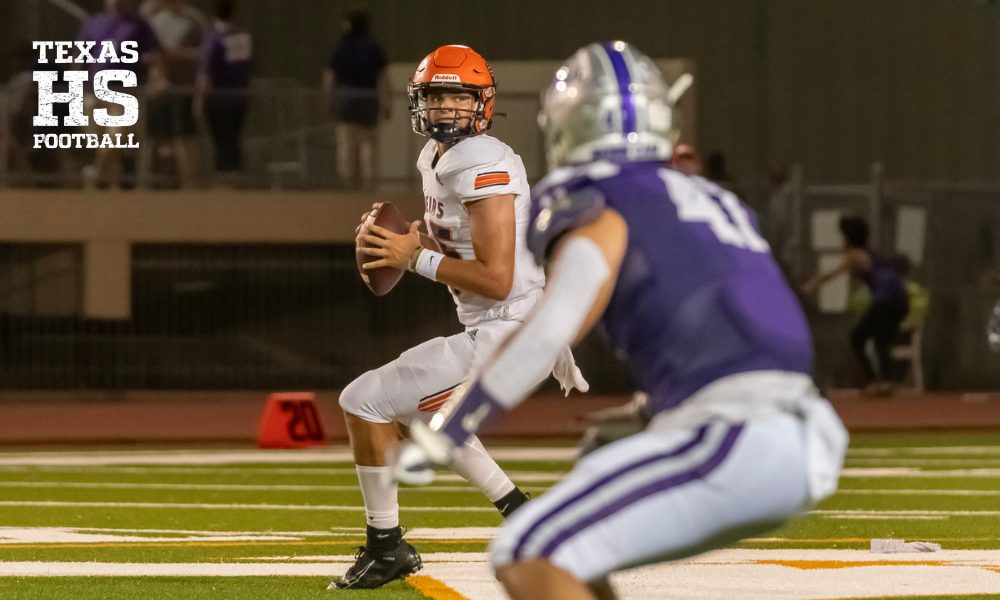 73 tackles, 2 TFL, 2 FF, and 1 INT. Klar had 18 tackles, a touchdown off a blocked punt, an interception, and a forced fumble in week one against San Antonio MacArthur. He followed that up with a 22-tackle performance against Stevens in the district opener in week three.

53 carries for 584 yards, and 7 TDs. McCoy-Gay made a statement in the season opener with 245 rushing yards and four touchdowns in a 69-17 win over Waco Midway.

He and the Dragons are currently looking to bounce back from a 21-13 defeat to Cedar Ridge in which he was held to just 88 rushing yards.

11 tackles, 2 INTs, 2 PDs. Biddle had a pick-six against Kimball in week one and had another impressive performance this past week, breaking up two passes and securing another interception in a 48-0 demolition of Wylie to open district play.

52 carries for 517 yards, and 6 touchdowns; 7 receptions for 145 receiving yards and 2 receiving TDs. Scott had a huge night this past week in a heartbreaking 41-40 loss to Montgomery Lake Creek.

He had 240 yards rushing, 84 yards receiving and scored 5 total touchdowns. Morton Ranch will desperately need him to make big plays in a competitive District 19-6A.

297 yards passing and 1 TD; 35 carries for 503 yards and 7 TDs. Anderson is being recruited as a safety but is starring at quarterback this year for the Bruins. He has missed the last two games due to injury, making the stats he has put up so far even more impressive.

23 tackles, 4 TFL, 1 sack, 2 FF, 2 FR, 1 INT. Harris has been a turnover forcing machine for the Highlanders at linebacker. After two tough losses to Bridgeland and Katy, Harris and the Highlanders will look to get back to winning ways against Aguillas Prep (Mexico) this Friday.

48 carries for 524 yards and 6 TDs; 7 catches for 122 yards and 2 TDs. Sanford has played a big role in the Knights’ 3-0 start. He already has three Division I offers and is primed to have a big impact in District 12-6A. He is averaging 174.7 rushing yards per game in non-district play.

23 catches for 445 yards and 3 TDs; 18 carries for 124 yards, 1 TD. Although the Cowboys are off to a 1-2 start, Nelson has proven his versatility. His biggest game so far came in week one against Sachse when he caught seven passes for 245 yards and three touchdowns. 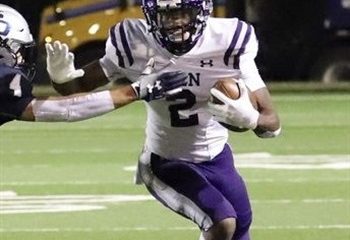 29 catches for 540 yards and 6 TDs. After only catching 4 passes for 41 yards in the season opener, Golden has had over 140 yards in each of the last three games for the Hurricanes (3-1). He is peaking at the right time.

18 catches for 440 yards, and 8 TDs; 120 passing yards and 2 TDs; 36 rushing yards. Beauchamp has two offers from FCS programs and has helped Vandegrift get off to a 4-0 start. He had a 38-yard catch-and-run touchdown this past week on a trick play in a 56-21 victory over district rival Stony Point.

Banks has provided protection upfront for a Summer Creek offense averaging 62.5 points per game. The Bulldogs are 4-0 and take on CE King on Oct. 1 to open district play. 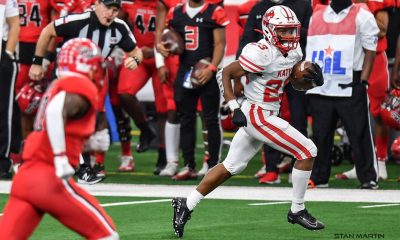 83 carries for 669 yards, and 6 TDs. With his older brother Jalen now at Arkansas State, Davis has the keys to the Katy backfield. He had a huge game last week in a narrow 21-14 win over The Woodlands, rushing for 224 yards and two touchdowns on 31 carries.

1,236 yards passing, 14 TDs, and 2 INTs. Rockwall-Heath is off to a 3-1 start thanks in large part to its explosive offense led by Hoover. Its lone loss came against Southlake Carroll 36-35 in a heartbreaker.  despite Hoover’s 345 passing yards and three touchdowns in that game.

1,202 yards passing, 11 touchdowns, 5 INTs. Another Rockwall-based quarterback, Locke has led the Yellowjackets through a gauntlet of non-district action. He helped Rockwall stun Lake Travis 59-35 behind 508 yards passing and five touchdowns in week three.

Locke and Hoover will go head-to-head this week as Rockwall and Rockwall-Heath battle to open district play.

87 carries for 676 yards and 8 TDs; 4 catches for 123 yards. Already in his third year of leading the Dragon backfield, he has picked up right where he left off with over 100 yards in each game, including a 215-yard, two-touchdown performance in a 45-21 win over Highland Park to open the season.

24 catches for 414 yards, and 7 TDs. Garland is making some noise after getting off to a 4-0 start this year. With South Dakota commit Sergio Perez throwing him the ball and his elite speed, Hudson has made several big plays, including a 99-yard touchdown against Richardson in a 55-3 victory in week two.

22 catches for 471 yards, and 6 TDs. Johnson had a game to remember in Rockwall’s 59-35 upset of Lake Travis in week three, catching 11 passes for 241 yards and four touchdowns. Division I offers are flying in with seven schools offering Johnson in the past week and a half. 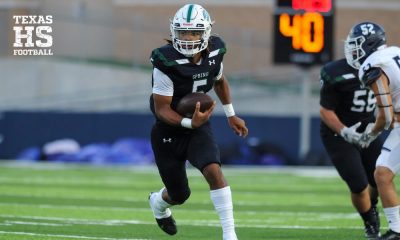 986 yards passing, 12 TDs, and 1 INT; 26 rushes for 280 yards, and 5 TDs. A dynamic, dual-threat playmaker, Davenport had 502 yards of offense and seven total touchdowns in Spring’s last game- a 69-21 victory over Tomball Memorial. With Davenport at the helm, Spring could be a threat in 6A this year.

73 carries for 740 yards, and 9 TDs. Wimbley has five Division I offers, including one FBS offer from Nevada. He opened the season with two straight 200-yard rushing games and hasn’t looked back from there as CE King has gotten off to a 4-0 start heading into district play this weekend.

127 carries for 775 yards and 13 TDs; 8 catches for 71 yards. Young only had 88 rushing yards this past week against Arlington Bowie, but the game was stopped in the second quarter with Midland Legacy up 29-0 due to lightning.

In the first three contests of the season, he had over 180 yards each game, including 250 rushing yards and four touchdowns in a narrow 43-37 loss to state-ranked Arlington Martin.

21 carries for 465 yards and eight touchdowns; seven total tackles, 2 TFL. A highly recruited prospect with 32 Division I offers, Perkins is a threat on both sides of the ball for 4-0 Cy Park.

While he has only played on defense in three of the Tigers’ four games, he has averaged 22.1 yards per carry offensively. Look for him and the Tigers to make some noise in District 16-6A as they go in search of their second-straight playoff berth.

It has paid dividends. Gordon has had at least 130 rushing yards in his four games behind center with the Trojans’ lone defeat coming to arguably the best 6A team in Westlake.

Pettaway is a highly-regarded recruit with 17 Division I offers, and it has shown during the opening weeks of the season. Despite Langham Creek’s 1-2 record, Pettaway has been consistent with at least 115 receiving yards in each of the first three games.

His average of 154 receiving yards per game is one of the best in the state. 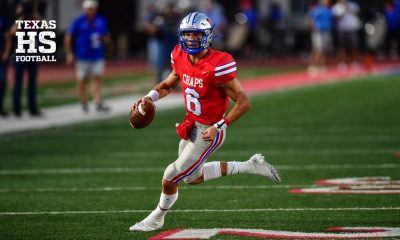 923 yards passing, 10 TDs, and 1 INT; 92 rushing yards and 3 TDs. Klubnik and the Chaparrals look like the best team in 6A yet again this year. He has thrown for 322 and 375 yards respectively the last two weeks, as the Chaparrals have knocked off two talented DFW sides in Euless Trinity and Mansfield Summit

1,112 passing yards, 11 TDs, and 4 INTs; 290 rushing yards and 2 TDs. He leads the Bears in rushing as well as passing. His last time out against The Woodlands, he totaled 576 yards of total offense and four touchdowns.

With a player as talented as Weigman leading the offense, Bridgeland could be a threat to knock off just about anyone in the state.