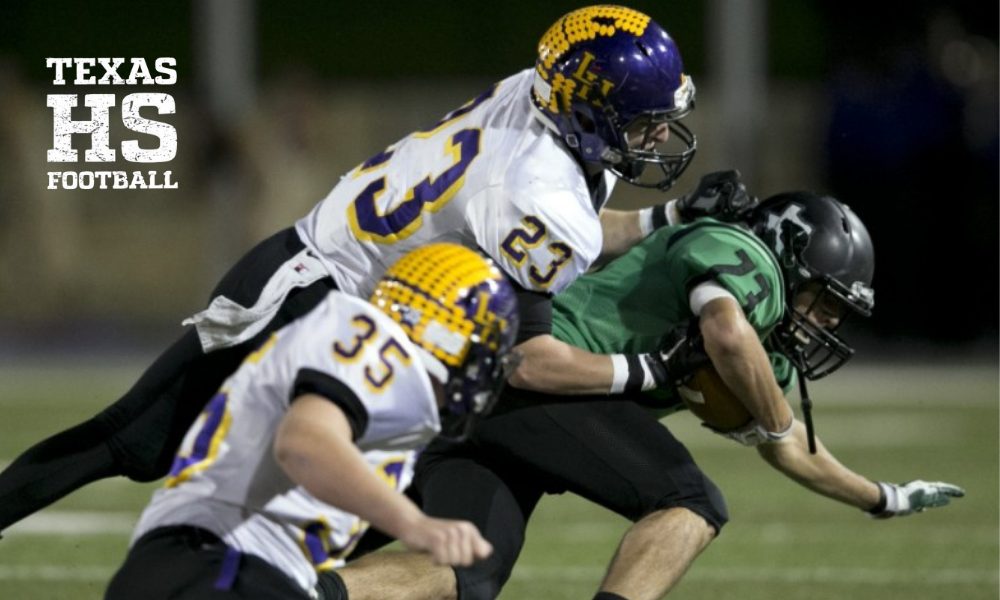 District play is well underway for most teams across Texas as the high school football playoffs continue to slowly edge closer. In the Austin area, competition is fierce as teams across the area battle for the coveted four available playoffs spots in their respective districts.

Here is a look at the top players that stood out during week 7 play in the Austin area.

Pell and the Timberwolves came out firing on all cylinders against Anderson last Thursday as they looked to bounce back from a disappointing 21-16 defeat to Pflugerville Hendrickson the week before.

Pell rose to the occasion. He passed for 250 yards and five touchdowns with no turnovers on the night. He threw for four of those touchdowns in the first half as Cedar Park dominated from start to finish in a 45-13 victory over the Trojans.

Don’t look now but Crockett is pushing for its first playoff berth since 2017. Newton has been a big reason why the Cougars are in playoff contention.

He led Crockett to a wild 41-34 victory over Austin Navarro last week. Newton threw for 157 yards and two touchdowns, while adding 51 yards rushing, including the game-winning six-yard touchdown run scored early in the fourth quarter, in a gritty 21-13 victory against Austin Northeast last Thursday.

With Crockett sitting at 2-1 in District 14-5A Division II play, its next game against Austin Travis on October 21 could very well decide its playoff fate.

Weiss has been lighting up the scoreboard in District 11-5A Division I play, averaging 54 points in its first three district games. In a 74-24 victory over Leander last Friday, Bradfield completed 12 passes for 250 yards and four touchdowns in a commanding performance by the Wolves offense.

Bradfield and the Wolves will look to keep rolling this Friday when they take on Pflugerville in a crosstown showdown.

Round Rock didn’t mess around with Hutto last Thursday. The Dragons leaned on their run game heavily as they rushed for 377 yards in a 41-12 victory over the Hippos.

McCoy-Gay led the rushing effort for Round Rock with 208 yards on 18 carries, and included a 66-yard touchdown run in the third quarter.

The senior has now rushed for 925 yards in Round Rock’s six games. He will look to have another impressive performance when Round Rock faces a struggling McNeil team on Friday.

After back-to-back losses to Austin Westlake and Lake Travis, San Marcos wasn’t going to be denied its first district win on Friday against Hays. Brown led the way with 444 rushing yards on 35 carries and five touchdowns as the Rattlers kept Hays at arms’ length in a 62-49 victory. It was their first win over the Hawks since 2003.

Brown and Rattlers will aim to keep that momentum going when they take on Austin High in a big District 26-6A matchup this Friday.

Manor is off to an impressive 3-0 start in District 11-5A Division I play and notched an impressive 45-12 win over Pflugerville this past Friday. Joyner was instrumental in the victory with 211 rushing yards and two touchdowns on just 12 carries.

He scored on a 12-yard scamper in the first quarter to open the scoring before adding a 55-yard score to open the third quarter that put Manor up 31-6 at the time.

Next up for the Mustangs is a trip to Pflugerville Hendrickson as they look to stay undefeated in district play.

The Tigers are now 5-1 on the year and will be heavy favorites to extend their current winning streak to five games when they host Gonzales this Friday.

The Tigers left no doubt as to who the better team on the field on Friday night was as they rolled to a 59-0 victory over Kyle Lehman. Koch paced the Tigers in the passing game, catching six passes for 132 yards and four touchdowns.

The touchdowns, from 30, 13, 2, and 10 yards, all came in the first half as Dripping Springs lit up in the scoreboard with 45 first-half points.

The Tigers currently sit at 6-0 on the season and will look to keep their record unblemished when they host San Antonio Veterans Memorial on Friday.

Hays may have come up short to San Marcos on Friday in a 62-49 defeat, but Taylor had a night to remember. He caught 12 passes for 225 yards and touchdowns of 57 and 38 yards.

His touchdowns tied the game up at 28 and 35 respectively before San Marcos scored 20 unanswered points to put the game out of reach for Hays.

Taylor’s offensive contribution will desperately be needed this Thursday as the Hawks have the unenviable task of squaring off against arguably the best team in the state in Austin Westlake.

Crosby finished with two catches for 45 yards and two touchdowns offensively, and he might also have made the defensive play of the week as Manor took on Pflugerville.

After Pflugerville scored its first touchdown of the night to cut the deficit to 14-6, the Panthers decided to go for two. It didn’t go how they planned.

Quarterback Jaylon Reeves threw a pass towards the end zone, but it was deflected off a Manor defender into the waiting arms of Crosby.

Crosby took off down the sideline and raced 106 yards for the two points for the Mustangs to put them up 16-6. It was an impressive play in an impressive 45-12 victory for Manor.

Thomas was a force in the middle of the Panther defense on Friday night against McCallum. He finished with 17 tackles, including five tackles for loss, in a 45-16 Liberty Hill victory.

An Army commit, Thomas has racked up 96 total tackles so far this year and will look to have another big game when the Panthers take on Marble Falls this Friday.

The Glenn defensive unit earns the last spot because of their suffocating play against Pflugerville Connally this past week. Glenn limited Connally to just 58 yards of offense, including only five total yards in the first half, and five first downs in a commanding 31-0 victory.

The Glenn defense will have a chance for another dominant performance this week when it squares off against an 0-6 Elgin side.