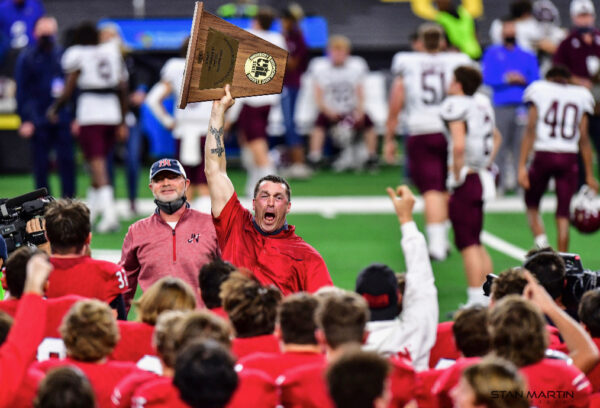 For the second day in a row, a two-point conversion proved the difference in the nightcap at AT&T Stadium. The stage for a thrilling ending was set after Jim Ned roared back from a 21-0 deficit to force overtime in the 3A Division I State Championship Game.

Hallettsville struck first in the extra period as its star running back Jonathon Brooks marched the Brahmas down the field on four carries. He finished the drive with a four-yard scamper to the outside to put the Brahmas up 28-21.

His counterpart, Jim Ned running back Xavier Wishert, answered right back, going right up the middle and carrying tacklers with him into the end zone for a 17-yard score to cut Hallettsville’s lead to one.

Jim Ned decided to end it right then and there.

“In that situation, we like our chances. We had a play called. We knew we could try to get them on a hard count, which is something that we practice regularly,” Jim Ned head coach Matt Fanning said. “We knew coming out of the injury timeout, they would be kind of amped up and we might have a chance to get them there. Just to be honest, I didn’t really want to have to try to defend them again.”

Quarterback Tate Yardley got Hallettsville to jump on that hard count before throwing a fade to his receiver Zach Henderson who got behind his man and came down with the catch to secure Jim Ned’s first ever state title in an unforgettable 29-28 victory.

“Once I saw the ball was snapped, I knew that I was going to have to make a play,” Henderson said of the two-point conversion. “I had all the confidence in Tate’s arm and I knew that he could give me a good ball and I just had to go catch it.”

On the other side of the field, the heartbreak was evident for Hallettsville as it came up short despite leading much of the game.

“I’m extremely proud of our kids and our community. I’m very proud going as far as we did. It stings a little bit like it should. Any type of contest when it’s that close, it’s going to sting a little bit,” Hallettsville head coach Tommy Psencik said. “But at the same time, I’m very proud of our kids and our community and proud of all the efforts that were made to get this far. I’m thankful to God and our families, and I wouldn’t trade our team for anybody.”

Early on, Jim Ned looked in serious trouble. Brooks gashed the Indians during the first quarter and a half, rushing for touchdowns of 56 yards and two yards either side of a nice back shoulder touchdown throw from Brahma quarterback Trace Patek to his receiver Ty Gerke. Those three scores had Hallettsville up 21-0 midway through the second quarter.

“Once they were up 21-0, I was telling everybody, I was like ‘this game is not over. It’s only the first half. We got this whole second half, and I know we’re going to go out this second half, make stops, and win this ball game,’” Wishert said.

The game-changing play came with 59 seconds left in the first half. The Indians were facing a first-and-goal at the Hallettsville 35 yard line after two penalties took a touchdown off the board and backed them up 30 yards.

Yardley was undeterred. He promptly delivered a dime to Henderson, who got behind the Brahma secondary for a 35-yard score, to pull Jim Ned back within two scores.

“You could feel the momentum swing pretty bad on that one in their favor,” Psencik said of that touchdown. “I wish we had it back and I’m sure that our defensive back would want it back too if we could, but it’s the nature of the game.”

In the second half, Jim Ned weathered the storm early on, including an interception by Brahma defender Deven Wood.

The Indians came alive on their second drive of the second half as Yardley and Henderson teamed up again. Yardley escaped a sack and floated a jump ball to Henderson in the end zone. Henderson high pointed it and came down with the 35-yard score to cut Hallettsville’s lead to 21-14 with just 90 seconds left in the third quarter. 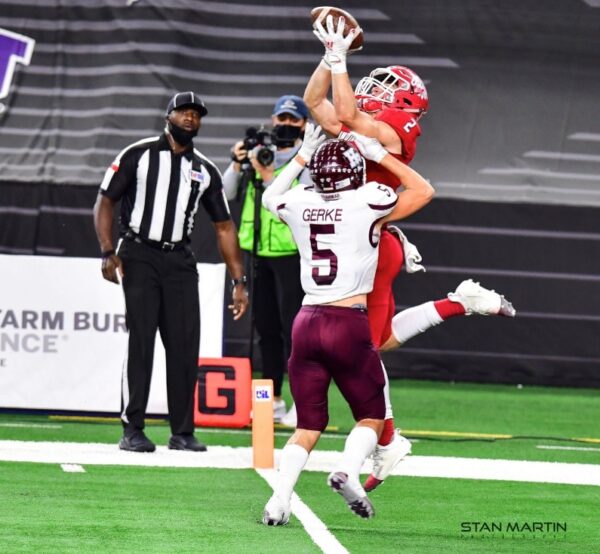 From there, all the energy in the building belonged to Jim Ned. Jim Ned defensive end Austin Martin stripped Brooks at midfield to start the fourth quarter, setting the Indians up with prime field position.

Jim Ned took full advantage. Xavier Wishert carried nine times for forty yards to put Jim Ned within striking distance and Yardley finished the drive off, finding Braden Lewis on a slant route from four yards out for the score to improbably knot the game at 21 with four minutes left in regulation.

The teams traded punts after that, sending the game to overtime which eventually resulted in the game-deciding two-point conversion. 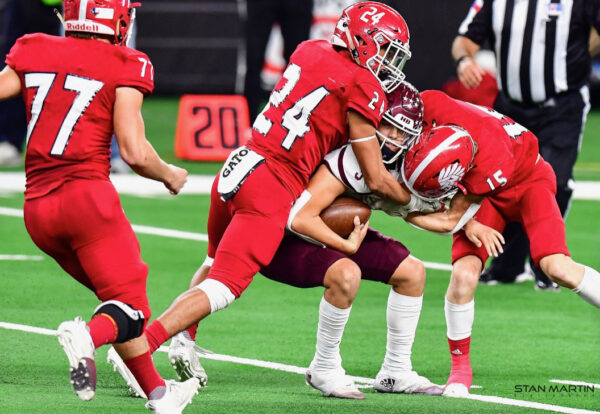 The two main players throughout much of the night on both sides of the ball were Wishert and Brooks, and they deservedly walked away with one MVP honor apiece.

Wishert made those plays all night, finishing with 186 yards on 35 carries and 12 tackles defensively, earning him Defensive MVP honors.

For the Brahmas, Brooks broke the 3A State Championship record with 299 rushing yards, earning him offensive MVP honors in his final Hallettsville football game before he heads to The University of Texas next fall.

“Jon Brooks was a blessing to the town of Hallettsville and his parents, our kids, and our team. I’ve never had a running back like Jonathon Brooks,” Psencik said. “He’s a leader for us. He’s got a lot of character and he cares. Some day he’s going to be a good dad and father and do a lot of great things.”

Meanwhile, Jim Ned will take home its first-ever state trophy to its dedicated fan base to celebrate.

“We’re just delighted. It’s amazing. This community has been awesome to me and my family,” Fanning said. “And just to be able to bring home a title to Jim Ned and for all the people who have supported this year and this time when everything is just negative, it’s really awesome.” 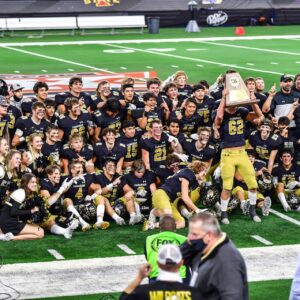 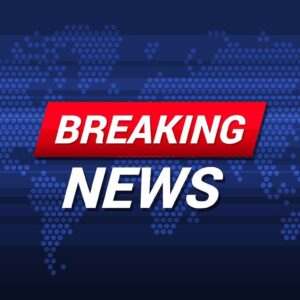