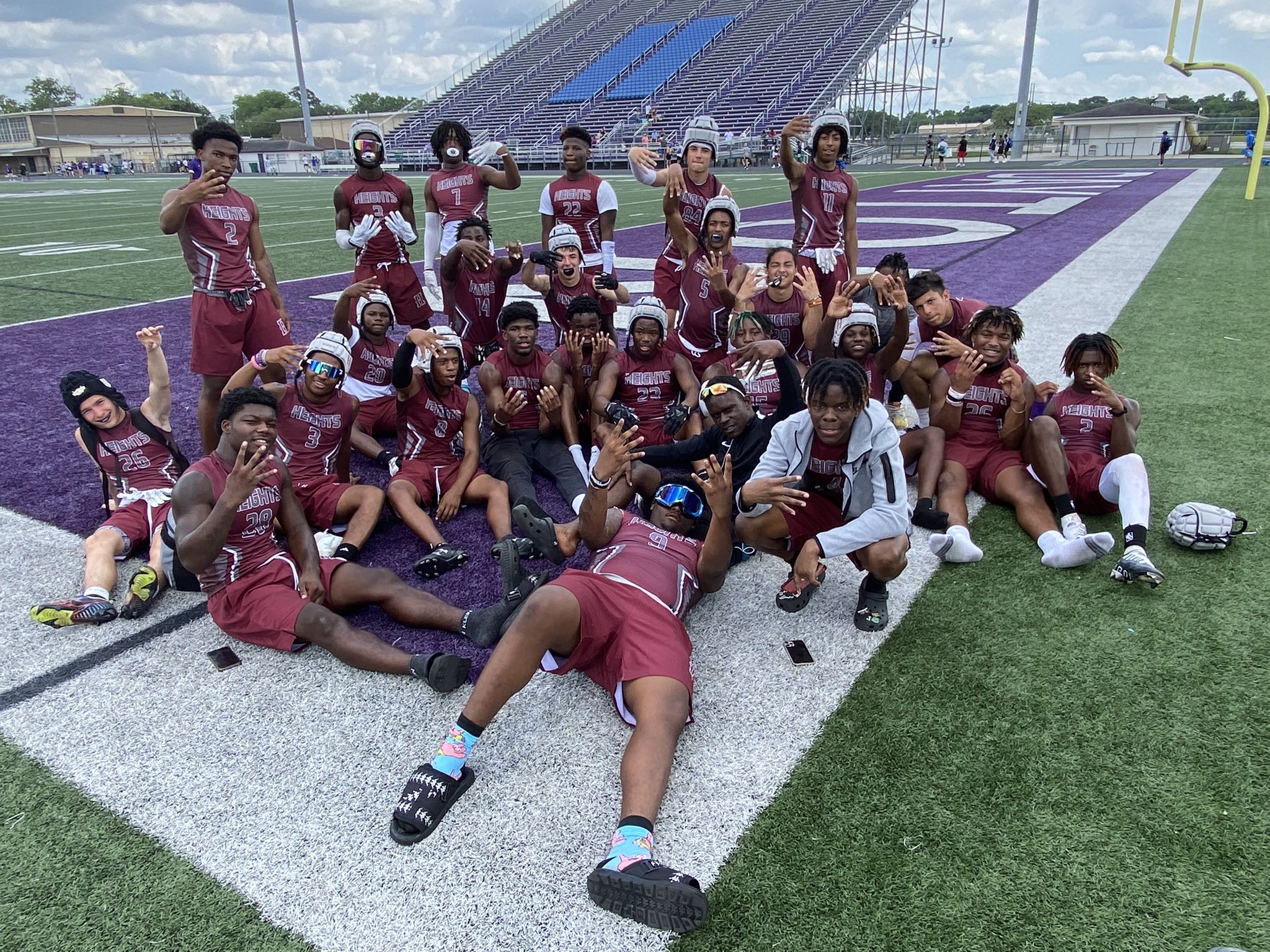 As South Oak Cliff celebrated the first state title by an inner-city program since 1985 after knocking off Liberty Hill in the 5A Division II State Title Game, it confirmed something Dixon had believed all along.

“Seeing that success of South Oak Cliff up in Dallas and seeing Austin LBJ make it to the state championship, I talk to my kids about that all the time,” Dixon said. “I think they gave us a lot of hope that we could do exactly what they did.”

The Bulldogs actually won the first-ever UIL Football State Title themselves with a 0-0 draw against Cleburne in the 1920 state title game.

They reached the title game again in 1950, losing to Dallas Sunset 14-6. However, in the 71 years since then, Heights has won just five playoff games total.

Heights is coming off a year where they finished 4-7, suffering a first-round exit at the hands of Houston Memorial in a 21-6 defeat. 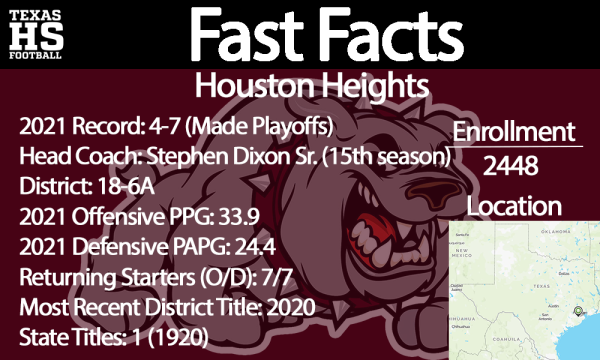 But Dixon believes this year could be different.

The return of seven starters on each side of the ball and the memory of its 2020 district title have given the Bulldogs hope heading into 2022.

“We had an average year [in 2021]. Just not as good as what we’re accustomed to,” Dixon said. “We had a young team. Pretty much everybody is coming back this year, [so] we’re expecting a very good year. My hope is that we can repeat what we did two years ago when we won district.”

This season, the strength for Heights offensively will be up front in the trenches where Dixon said everyone returns from a year ago. He said he’ll look for junior Frank Moss, who already has offers from Houston and Southern, to anchor the unit.

Out at receiver, the Bulldogs have plenty of talent as well. Senior Amilcar Frazier (238 receiving yards), sophomore Joseph Diaz, junior Lamont Robins, junior Nick Brown, and Fort Bend Marshall transfer Ke’von Misher (184 receiving yards in 2021) are all players Dixon expects to have an impact in the passing game for his Bulldogs this year.

Meanwhile, the Bulldogs will have plenty of athleticism behind center as Allen Rainey slides over to the quarterback position after starting at receiver last year for Heights.

Defensively, the Bulldogs will have two key leaders at linebacker as juniors Brice Chevalier (53 tackles) and Jaylon Bihms (48 tackles) both return. In the secondary, Dixon said he’ll be looking for senior Jared Sutton (41 tackles, INT) to lead the way.

Up front on the line, Dixon said the Bulldogs will be a little bit younger but still talented. Senior Hezekiah Adams will bring some experience, while sophomore Jordan Clavelle is already attracting the attention of some Division I programs with his potential.

And as he and his Bulldog teammates have progressed through their summer workouts, Sutton said he’s encouraged with what he’s seen so far.

“We’ve got a lot of young guys coming up, and they’ve been having a good summer. We’ve definitely improved from last year,” Sutton said. “With me being in the secondary, I’m pushing them to be the greatest they can be. We’re going to continue to work and compete.”

After Dixon, Sr. first took over in 2008, the Bulldogs won just six total games in his first three years. Since then, they’ve made the playoffs 11 years in a row, while also winning their first 6A district title in 2020 after snapping Lamar’s 72-game winning streak in district play.

Dixon said the growth of Heights and its fellow Houston ISD competitors in District 18-6A has been evident over the years.

But despite Lamar winning its 11th district title in 12 years in 2021, with the wealth of returning talent and the development of key young players for Heights, Dixon believes the sky is the limit for his Bulldogs in 2022.

“Lamar ended up winning district back again [in 2021], but in my book, I think we have a chance to take those reins back over again [this season],” Dixon said. “Our plan is to have a great year. Not just a good year, but a great year.”