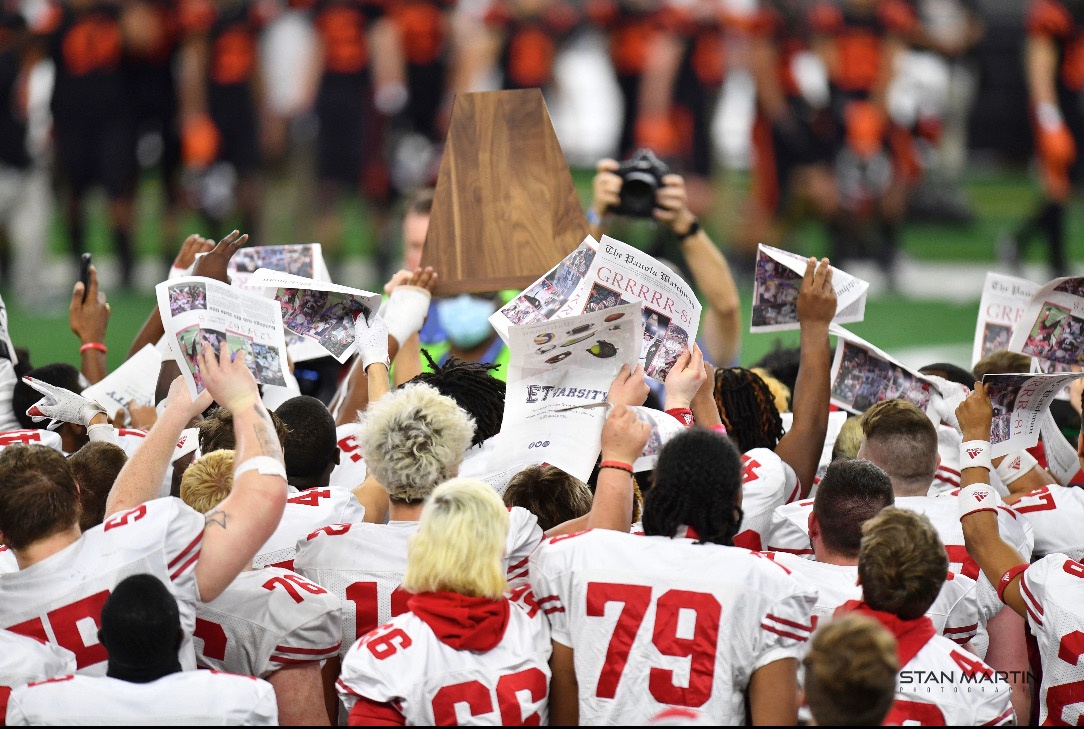 Gilmer was up 14-0 after just five minutes of play in the 4A Division II State Title game, and it looked like another upset could be on the cards at AT&T Stadium.

However, it was all Carthage after that as the Bulldogs scored seventy unanswered points to run away with the state title in a 70-14 victory.

Defensive back Brandon King had two pick-sixes and four interceptions overall, a remarkable performance on his birthday, as he and the Bulldog defense shut Gilmer out after the first quarter.

“It’s amazing. On his [King’s] birthday, even more special,” Carthage quarterback Kai Horton said. “Our defense, they got off to a rough start, but we knew they were going to have our backs. They’ve been doing it all season long. They deserve it. They’re a tough defense.”

“I’ll never be able to describe how much work me and Kai put in for this. We’ve been working every day, all day, for as long as I can remember,” Courtney said. “Getting to savor that moment my senior year with my brother [Horton] is the greatest experience I’ve ever had.”

The game started very promisingly for Gilmer as the Buckeyes came out guns blazing. Receiver Rohan Fluellen took a tunnel screen 52 yards for a score before a successful onside kick by Gilmer kicker Jose Hernandez allowed the Buckeyes to get another quick score as quarterback Brandon Tennison found Fluellen again for an 18-yard touchdown to put Gilmer up 14-0 just five minutes in.

“If you’re just going to come out and play conventional, they’re [Carthage] extremely talented. They’re extremely big on their lines and it felt like it was going to be a tough battle up there on the fronts, so we felt like we had to push the envelope a little bit,” Gilmer head coach Alan Metzel said. “For example there on those first two drives, we were able to hit some of those plays and make a break for a touchdown. Unfortunately, we didn’t make enough of them today to sustain that momentum.”

The momentum-changing play was a bit of trickery that Carthage pulled out of its back pocket. Horton threw a lateral to his receiver Craig McNew, who sidestepped a defender, and threw it back to Horton, who followed his blockers for an 18-yard score to cut the deficit to seven.

“It did spark us. Craig made a great throw to Kai and Kai made a phenomenal run. Kai is very underrated as a runner,” Carthage head coach Scott Surratt said of the trick play. “We just knew we had to keep playing. This whole group is going to play hard for 48 minutes. We made some mistakes early, and they capitalized, but after that, we played clean football.”

Carthage responded to its early deficit by scoring four touchdowns in under three minutes of game time in the early second quarter to blow the game wide open.

Courtney broke free for a 37-yard touchdown run, Horton found a wide open Braeden Wade for a 29-yard score on the next drive, and then King came up with two pick-sixes on two consecutive offensive snaps on two tipped passes thrown by Tennison.

“On the first one, it was a tip drill. The receiver tipped it to me and I caught it and just broke off,” King said. “On the second one, Kip Lewis, he tipped it up to me with his left hand and I just ran it back.”

With a 35-14 lead, the Bulldogs kept their pedal to the metal. Horton completed a screen pass to Kavonte Brown-Hoskin, who broke free for a 61-yard score with four minutes to go in the second quarter to give Carthage a 42-14 halftime lead.

The second half was much the same as the second quarter. Courtney added touchdown rushes of 69 and 23 yards and Montrell Smith took a pitch pass 15 yards to the house to extend Carthage’s lead to 63-14 heading to the fourth quarter before backup quarterback Javarian Roquemore scored the final touchdown of the afternoon on a four-yard touchdown run with four minutes to go.

Despite the heavy defeat, the groundwork has now been laid for Gilmer after head coach Alan Metzel took the Buckeyes to this state championship game in just his first year in charge.

“We want to get back here as many times as possible. I think getting to come and have this experience- you have so many guys that will return and you’ve set the standard for them. They know what it looks like. You’re hoping that the game won’t be too big the more times they come,” Metzel said. “I think overall, our program took a step forward this season.”

Meanwhile, the Carthage dynasty is still alive and well with eight state titles now in just the past 13 seasons, all under the reign of Surratt. The scary thing too for other 4A schools is that the Bulldogs will return almost their entire defense next season.

“It means everything,” Surratt said of this year’s title. “I’m the lucky one who got the job 14 years ago. To win one championship is unbelievable, but to win eight, it’s just crazy.”