Coach’s Corner: Why So Many Formations?

There are generally three trains of thought with offensive football when it comes to formations:

Let’s take a look at the second for this article and how it can create advantages for an offense. I personally have always believed in this method as you have a few plays but have the ability to run them out of many different formations. This helps make it simple for the offensive players while at the same time creating confusion for the defense.

(Side Note: If you can limit what the offensive line needs to know, you will have a better chance to be successful as they have so much to think about and do already without having a million plays running around in their heads and how they will be blocked vs. all the fronts they could see). 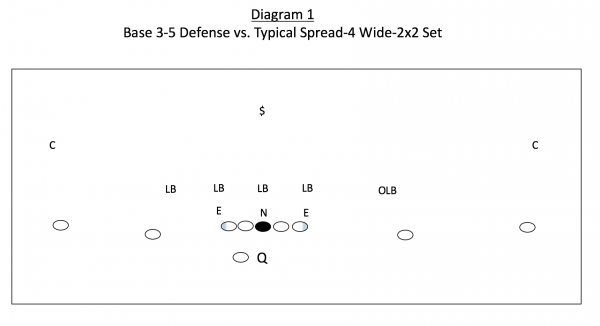 As you can see from the diagram, this defense keeps 6 defenders in “the tackle box” without being outflanked at the line of scrimmage by keeping DE’s outside the offensive tackles. This also allows 8 defenders to drop into coverage when necessary to defend a pass. By stacking the LB’s over the DL the defense now has the ability to bring pressure and easily create confusion for the OL.

From an offensive standpoint, this makes blocking assignments tougher as the angles to get to those LB’s are more difficult when they are stacked. Because of this and having 6 defenders in the “box”, the offense must use the QB as runner and RB as blocker to get enough “hats” on defenders or they must leave a defender unblocked and “read” him. As you can see, the 3-5 makes running the football a tougher challenge for the offense, forcing them to get creative if they want to run.

Now that we have discussed the basics of the 3-5 defense vs. the spread let’s talk about how you can use formations to create advantages.

Outflanking at the Line Of Scrimmage

First and foremost, outflanking the defense at the first level allows an offense more flexibility in run game selection. This can be accomplished vs. the 3-5 by taking out a Slot WR and adding a Tight End (TE). 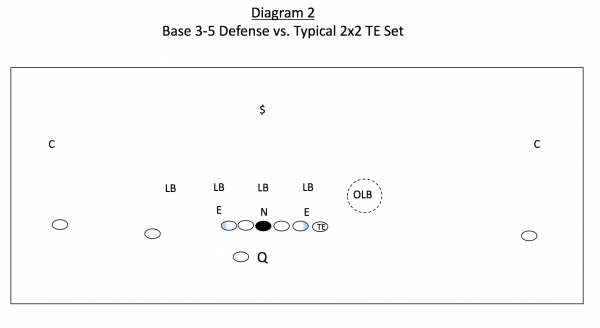 With this new formation, you are now outflanking the DE because in a 3-5 the DE will stay in a shade on the outside of the offensive tackle. Some defenses will keep that OLB off in space vs. this formation. If this is the case, the offense now has the ability to run the ball outside to the TE with a speed option look (reading the OLB and pitching off of him), or outside zone with the QB having the RB lead on the OLB, or running with the RB and pulling an uncovered lineman to block that OLB. 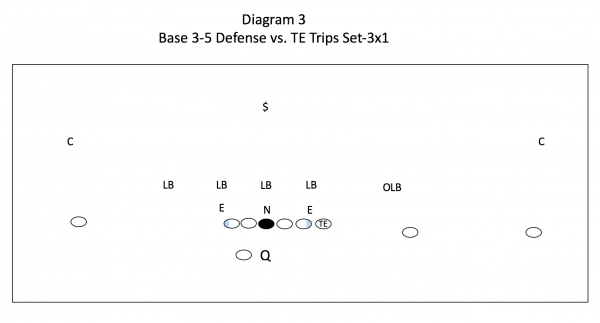 By taking the Slot WR from the other side of the formation and making a 3×1 formation with a TE, you now have them outflanked at the line of scrimmage and also now have a blocker for the OLB. This also opens up a few new passing concepts as the offense has moved from a 2×2 formation to a 3×1.

This is why so many “spread” teams are now using a TE or an “H” back in their offense, to create leverage for run game and also add a “gap” (space between two offensive players on the line of scrimmage) for the defense to defend.

Another advantage of using multiple formations is to help create mismatches. Cornerbacks are typically the best pass coverage defenders on the field. When the defense starts playing some man coverage, you can use motions with your formations to create advantages as well.

Let’s say that you put one of your better route runners in the Slot position in a 3×1 TE formation and motion your outside WR on that side across to the other side. If the defense is playing man coverage, that Corner will go with him. This now give you a match-up of your best WR on an OLB 1/1. 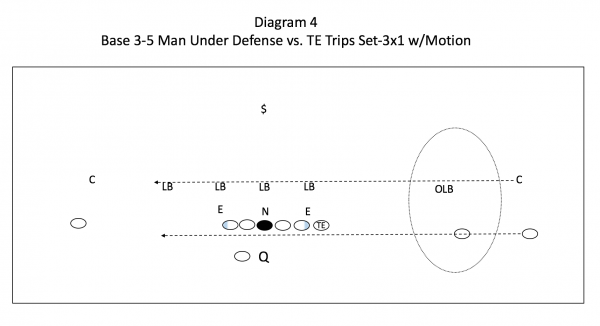 As you can see from the diagram, this gives the offense a favorable match-up to take a shot with.

Make sure you have a good route running and pass catching RB in the game and motion him out to the boundary sideline. This will now put that OLB in tremendous conflict as to figuring out who to cover if the Safety doesn’t rotate over and help. If he widens, run the ball to that side. If he stays at the line of scrimmage, throw to the boundary. 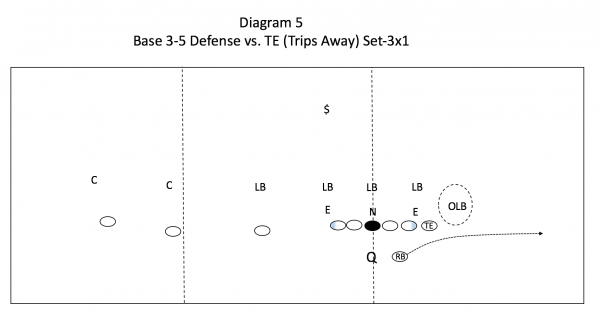 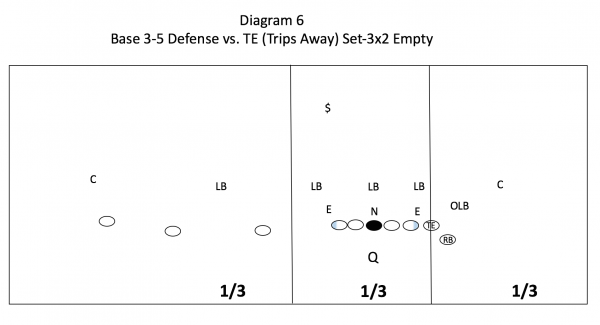 This formation gives the offense an opportunity to see how the defense will play. Dividing the field into vertical 1/3’s allows the QB to determine what he wants to do. A defense will have a hard time defending all 3 1/3’s vs. this formation. The QB can elect to throw to the three WR side if he has the advantage with numbers, or could elect to run inside the tackle box if the LB’s have widened out on both sides, or he could run it to the boundary, wing side if they have defense outflanked and outnumbered.

Forcing a Defense to Prepare For Multiple Formations

If an offense subscribes to the few plays, multiple formation theory as we discussed earlier you are also creating a dilemma for the defensive coaches during their weekly prep. Giving them multiple formations forces them to teach their players where to line up vs. each formation and sometimes making them line up and play in a spot that they hadn’t played in before.

This takes time in practice to coach up and therefore limits the amount of time a defense has to prepare for any one particular formation thus giving an offense a slight advantage in the preparation phase as well.

There are many, many other examples that can be used to discuss how formations can create an advantage. We have only discussed one base defense (3-5) vs. 10 and 11 offensive personnel (first number = how many RB’s, second number = how many TE’s).

Being an offensive coordinator at times can be like being a chess player when it comes to scheming for a defense. Figuring out where to align guys to create best match-ups, removing defenders from an area you want to attack by using formations and motions, and outflanking the line of scrimmage by use of different personnel.