Lake Travis’s Charlie Brewer On His Season, His Career, Recruiting, And The 6A DI State Title Game 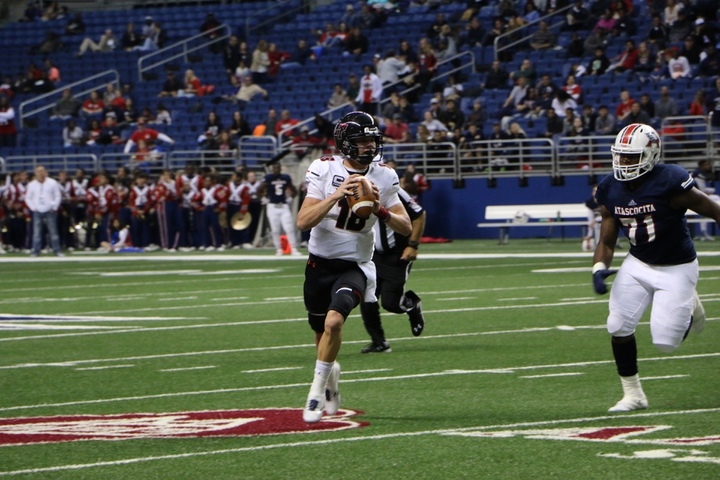 Lake Travis quarterback Charlie Brewer has the kind of high school football resume student athletes dream of. In two years as the shot-caller of the Cavaliers, the senior has only dropped three games, totaled 7,997 yards, and 10 interceptions. The only thing missing from his impressive record is a state championship victory – a feat he’ll have the chance to accomplish this Saturday against The Woodlands.

What’s even more impressive is the winning lineage Charlie was born from – bred as an accomplished football player from the cloth he was cut. His father is Robert Brewer, a successful UT quarterback who won the MVP in the Cotton Bowl against Alabama; his grandfather is Charles Brewer – his namesake – who was a starter for the Longhorns and set a then record for highest gain per pass completion; His brother, Michael, preceded him as the Cavaliers qb, winning two Division 4A titles.

Brewer is now an SMU commit, eager to learn from his rich family of gridiron experience, his loss to Katy in the state championship last season, and the relationship strengthened with his teammates following an opening loss to Judson.

TexasHSFootball sat down with the Cavs quarterback in an exclusive interview:=.

When you were a sophomore, did you start any games? Or were you a starter during your junior and senior years?

I started a few games my sophomore year. I started my first three games and we went 2-1.

In all, you’ve lost three times in your high school career. I know you all lost to Katy last year in the championship game. What’s your mindset going into Saturday against The Woodlands to avenge that loss? So that you can have this complete high school career where you’ve lost three games and you finally get the state championship that you want. What’s your mindset going into that match?

Definitely a positive mindset. You always want to go into a big game like this feeling good. Have a lot of confidence. We are playing a really good team this time of the year. Whenever you’re fortunate enough to play in the state championship, you’re going to play the best of the best. No surprise The Woodlands are in this game. They’re a great team. We need to have a really good week of practice and prepare really well. It would mean the world if we could bring it home to Lake Travis.

Hopefully we can control the line of scrimmage and be able to run the ball and throw it around a little bit. Last year in the state championship game, we were careless with the football. I turned it over a few times. We fumbled a few times. We had our defense in bad situations where the other team had a short field. This year versus The Woodlands Saturday night, we gotta take care of the football. Play smart football, mistake free football. Set ourselves up for the short field maybe a few times, and help our defense out.

I know since the first game of the season… obviously you all lost. What changed? I mean, ever since then, there hasn’t been too many close games. Where did that unbeatable confidence come from?

I think after it was a reality check. We played really bad football in that first game. It showed with the loss. I think that after that, all of us got together and said, hey we got the guys to do this this year. From then on, I think that we gelled together and played as one. Taking it week by week. We’re finally here for the big one and I couldn’t be more excited.

I know that you’re an SMU commit and coach Chad Morris decided to stay with the program instead of going to Baylor, because he got some offer with Baylor but he turned them down. It seems like the Mustangs are on the rise. So why did you choose them over any other school?

I felt comfortable there. I loved Coach Morris, he’s always treated me well. I want to play for a head coach that’s going to treat me well and play for a guy I’ll enjoy playing for. That’s him.

I saw too that your buddy Sam Ehlinger over with Westlake, he’s trying to recruit Cade (Brewer) pretty hard with UT. I know he just got an offer. How likely do you think it will be to keep him over there in SMU and not let him go to the Longhorns?

He got presented with a great opportunity to play with Texas. (Inaudible) It’s a big decision for him, where he’s going to spend the next four to five years of his life. He’s my good buddy and one of my best friends. So, I’m not going to put a ton of pressure on him. It’s his decision. I’m going to be more of a good friend in that situation with him. I’d love to play with him for the next four to five years. Whatever he chooses, I’m going to be rooting for him.

Speaking of Texas, I know you come from a long line of football lineage with your dad and your grandfather. What’s some of the advice that they’re giving you for this state championship game and what have you learned from both of them.

I’ve learned a lot from them. They were both two great players back in the day. Great role models for me. They just said, in a big game like this, take care of the football. My dad really just said to enjoy it. Not too many kids my age get to play on a stage like this against these players on Saturday night. He really just said soak it in and have fun with all your best friends one more time.

After the game Saturday night, what’s the first thing that you’re going to do?

I’m hoping that we come away with the win. If we do, me and my buddies are going to have a good time and enjoy it with each other. Everyone on our team…we want it real bad. We’re going to have to show up and play well. Hopefully, if we get that win, we will have a lot of fun after the game.

And hopefully some sleep and some ice too, right?

We’ll all get together in the hotel after and have fun for a little bit. We’ll probably be a little banged up from the game. It will be a good pain if we can come away with the win.