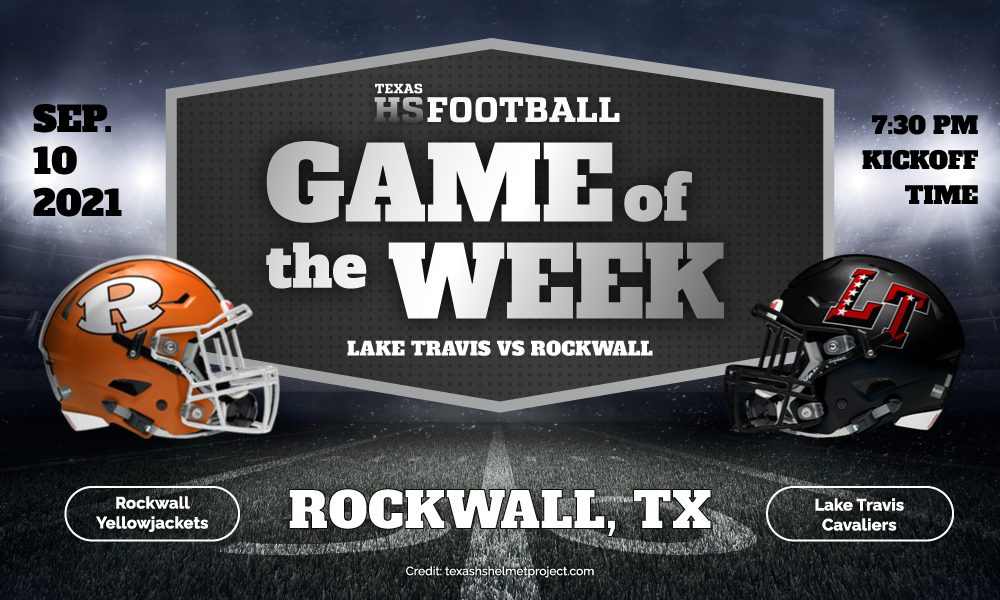 Rockwall wasn’t exactly the most hospitable host as the Yellowjackets and Lake Travis battled it out on Friday night. For the 1st half, it was a back-and-forth affair. But Rockwall pulled away in the 2nd half and won easily 59-35.

A Battle Back and Forth

Both teams swapped touchdowns in the first quarter. Cavaliers QB Bo Edmundson threw a 9-yard touchdown pass to Isaac Norris for an early 7-0 lead. But Rockwall answered right back with a 4-yard touchdown run by Lake Bennett to tie the game 7-7 at the end of the 1st quarter.

Rockwall QB Braedyn Locke started off the 2nd quarter with a 75-yard touchdown pass to Noble Johnson to put the Yellowjackets up 14-7.

Lake Travis kept up the pace, with Derrick Johnson racing for a 56-yard touchdown run. Not to be outdone, Rockwall’s RB Zach Hernandez took off on a 75-yard TD run to put Rockwall ahead 21-14. Edmundson answered by tossing a 12-yard touchdown pass again to Isaac Norris to tie the game at 21-21.

Later in the 2nd quarter, Rockwall intercepted an Edmundson pass at their own 31-yard line. On the next play, Locke found Noble Johnson for a 69-yard TD pass to take a 28-21 lead.

Norris added a 4-yard TD run to tie the game at 28-28. Rockwall countered with a field goal to take a 31-28 lead into halftime.

A Tale of Two Halves

The Cavaliers’ Kyle Thompson recovered a wayward Rockwall fumble at their own 16-yard line. Lake Travis promptly moved the ball down the field and Edmundson threw a 24-yard TD pass to Derrick Johnson to take a 35-31 lead midway through the 3rd quarter.

That would be the last time Lake Travis would score.

Locke found Noble Johnson again for a 20-yard touchdown pass to take back the lead for good at 38-35.

In the 4th quarter, Lake Travis was plagued by turnovers. Edmundson threw two INTs, one for 28-yard pick-six to put Rockwall up 52-35.

Locke found Noble Johnson one more time on a 25-yard touchdown pass to make the score 59-35.

Rockwall improves to 3-0. The yellowjackets take on Highland Park next week. Lake Travis falls to 2-1 and will face off with San Marcos on 9/17.