Gerry Stanford Back In Familiar Territory At Texas High 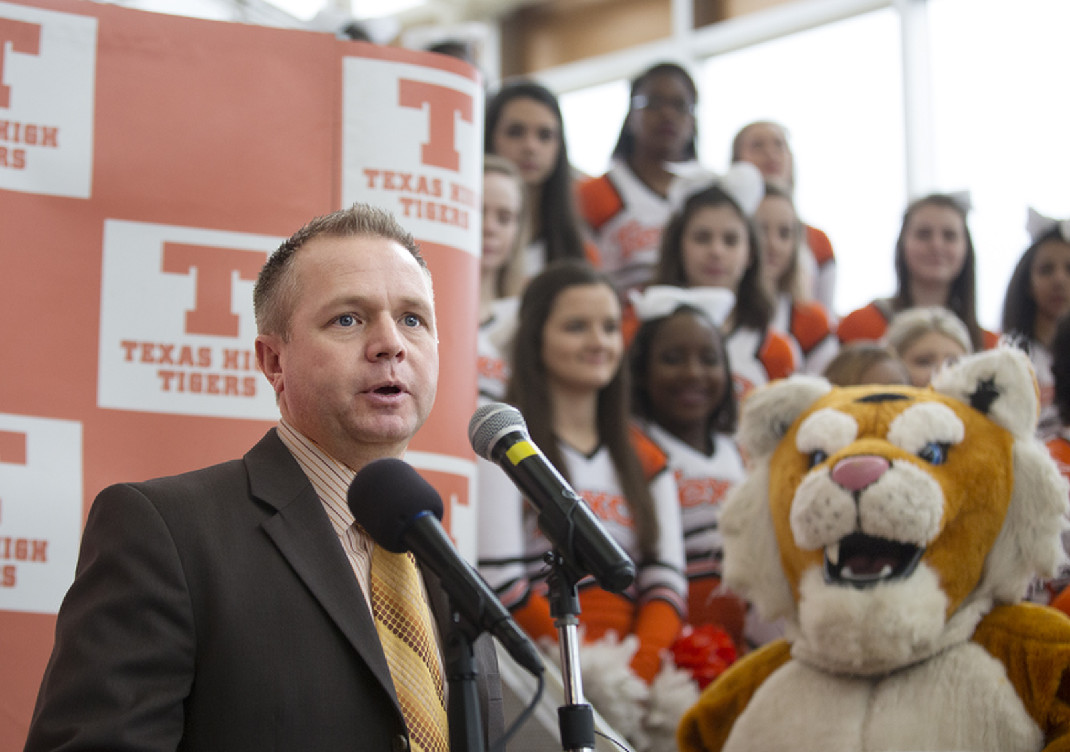 When a head coach takes a new job in a new place, there is always a transition period. It might be longer for some but they all go through it. But after leading Flower Mound Marcus the past three seasons and a stint at White Oak, Gerry Stanford is back in a familiar place in East Texas, this time as the new head coach of the Texas High Tigers in Texarkana.

“There’s definitely some comfort in knowing the area and the lay of the land,” Stanford said, “In the coaching world, a big deal is having a relationship with other coaches in the area to reach out for advice. It gave my wife and I a lot of comfort to know what we were kind of walking into.”

That home feeling has made the transition easier, Stanford said. As he and his family gets used to his new surroundings, he steps into the job knowing he has some pretty big shoes to fill taking over for longtime head coach Barry Norton. Norton resigned from Texas High back in January to take the head coaching job at archrival Arkansas High. With a long time face of the program gone, Stanford is looking to place his own stamp on what has been a very successful program under Norton.

“Great players make great coaches,” Stanford said, “But I think the biggest thing that will continue to carry this program is to see your kids put forward the effort and instilling a sense of pride, tradition, and the will to win. The culture of winning is there with these kids. We just want to increase the level of play that we have each day.”

Stanford is also fully aware of how big that first meeting with Arkansas High will be in September. However, he’s keeping things in perspective by keeping his focus on what’s going on with his new program.

“The rivalry with Arkansas High is one of the most unique in the state of Texas,” Stanford said of the rivalry, “It’s a constant talk around town and is something that comes up when I get introduced to someone. Right now, we’re just trying to focus on us and that game will take care of itself when it gets here.”

So far, Stanford likes what he sees from his team heading into 2017. He takes over a team that went undefeated during the regular season but was upset in the first round of the 5A Division I playoffs by West Mesquite. There also comes the task of replacing several key starters, including starting quarterback Cade Pearson, running back Devuntay Walker and receiver Quan Hampton. While Stanford figures those equations out, he is confident that he has a team ready to work and that has a lot of potential heading into next season.

“We always live with the adage that people are going to chase our effort,” Stanford said, “We believe in that and we’ll stick with that. I think this team can go as far as it wants to go within the idea that scoreboards don’t determine our attitude or the outcome of our lives but our effort will.”