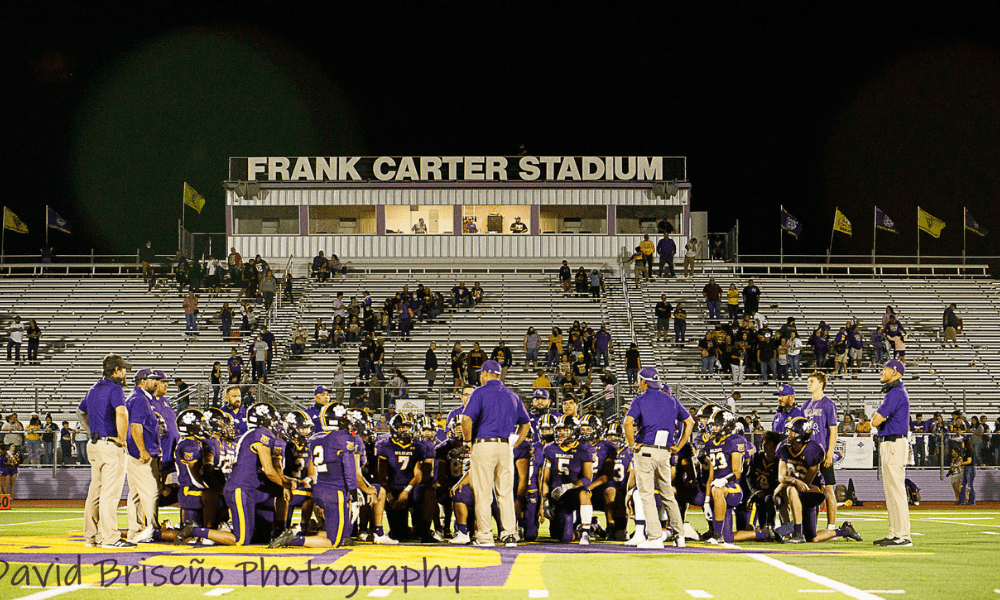 The Wildcats were wrapping up a Wednesday practice when legendary head coach Don Tate, who won 145 games in 21 seasons with the Wildcats, brought Gonzalez over with the team.

“[Tate] asked me, ‘One day next year, is this where you want to be?” Gonzalez said. “I said ‘Absolutely Coach.’ That’s the commitment that one would make then. From that point forward, I knew that’s where I wanted to be, so it made it an exciting place.”

Gonzalez made good on his promise. He was a four-year varsity letterman for Carrizo Springs from 1995-1998, rushing for 3,964 yards in his final three seasons.

Now 23 years later, as a first-year head coach in his hometown, he has the Wildcats off to a 7-0 start. It’s the first time they’ve won seven games in a single season since his senior year in 1998.

Gonzalez was born and raised in Carrizo Springs, a town of 5,368 people located in South Texas about 45 miles from the border. When he took over in late May, he assembled a staff that would know what it’s like to be a Wildcat.

His Offensive Coordinator Carlos Buentello was the quarterback on the 1998 Carrizo Springs team while 1997 graduate Julio Betancourt and 2002 graduate Sergio Zamora are on staff as well.

As the fourth head coach in four years for Carrizo Springs, Gonzalez credits the old-school mentality established by his coaching staff as the foundation to the Wildcats’ success this year.

“A lot of the other individuals that have been hired in the past were not locals, so they never knew the idea of what it would take to motivate these kids,” Gonzalez said. “Coming back to this, we just brought the old-school mentality as far as what we used to do in the past.

The mental part is what these kids have been lacking. It was never their ability.”

Due to that old-school mentality, Gonzalez said that there is a belief among his team that the second half each week is theirs thanks to their emphasis on conditioning in practice.

“There are certain conditioning things that we do that we push our kids to the limit,” Gonzalez said. “They feel that they’ve bought in, and they know that other teams in the area don’t do what we do. That’s just the way we approach things.”

Gonzalez’s old-fashioned mentality extends off the field as well. He doesn’t have a Facebook account, and he tells his team that they don’t need to post anything on social media. His philosophy is if the Wildcats play well enough, media attention will come.

So far, his vision is working to perfection thanks to his team’s performances on Friday nights.

Led by senior linebackers David Castro and Oscar Briseño, the defense has pitched shutouts in five out of seven games and has allowed just 50 points total so far this season.

The offense has been high-flying as well. Sophomore quarterback Evan Castellanos and senior wide receiver Avery Ramirez have both had impressive seasons so far, and the Wildcats have been averaging 34.7 points per game.

That combination of lockdown defense and an explosive offense has helped the Wildcats break several longtime losing streaks this season.

They opened their season with a 30-0 win over Uvalde, their first win against the Coyotes since 1984.

Four games later, in the third quarter of their final non-district contest against Zapata, a kickoff return touchdown by Austin Reyes; rushing touchdowns by Castellanos and Sergio Sonora; and a passing touchdown from Castellanos to Ramirez helped turn an 18-14 halftime deficit into a resounding 40-24 victory. It was the first time Carrizo Springs had beaten Zapata in nine meetings.

However, their most important victory so far this season came one week later against Devine in the District 15-4A Division II opener. With the Wildcats trailing 26-20 in the fourth quarter, Reyes broke free for a 52-yard score to tie the game up.

On the ensuing possession, the Wildcats defense recovered a fumble, allowing Castellanos to drive his offense down the field and score the winning touchdown on a one-yard quarterback keeper with just 39 seconds remaining. The 33-26 victory was Carrizo Springs’ first win against Devine since 1994.

“We knew that our biggest challenge was being able to overcome Devine,” Gonzalez said. “That right there set the tone and the mentality at the beginning of the district.”

The Wildcats shut down Bandera 18-0 for their second district win last week, and they will be favorites this Friday against Pearsall (0-7) and next week against Crystal City (1-6) before they host Hondo on Nov. 5 in what could decide the district title.

If all goes to plan, the Wildcats could be seeking their first district title since 1997 that night.

Gonzalez said he still remembers defeating the Cotulla Cowboys in front of a packed crowd in Carrizo Springs in 1997 for the Wildcats’ last district title.

He believes if the winner-take-all showdown against Hondo comes to fruition, the atmosphere will be just as memorable.

“We’ve been living in Devine’s and Hondo’s shadows for the past 20-plus years,” Gonzalez said. “To know that the opportunity is there to put a gold ball on the wall, people will be going off the chain. There’s been a lot of these community members that have never gotten to experience that. It will be an exciting time.”