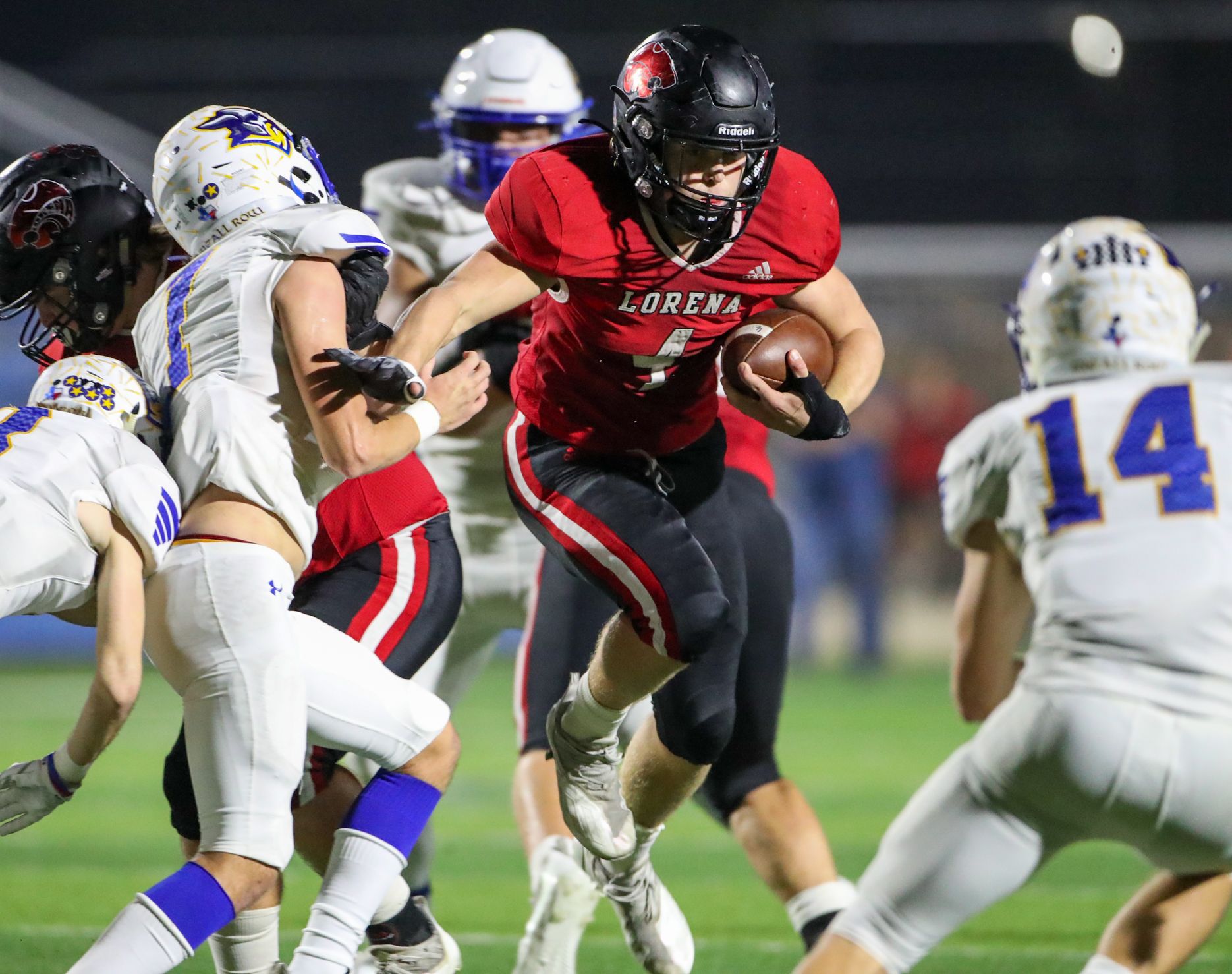 Gas cost just $1.00 per gallon the last time Lorena was in a state title game.

At the time, Lorena head coach Ray Biles was still on staff at Katy. It would be just under three years before he would take the Leopard head coaching job. 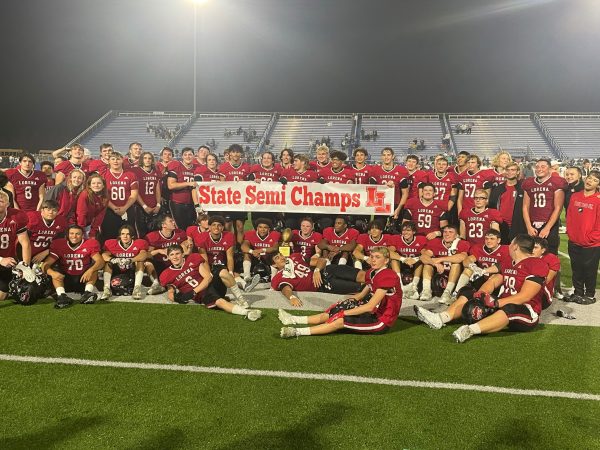 Lorena celebrates after the game.

But after a dominating 55-17 win over Lago Vista on Thursday night in Georgetown, Lorena is set to play for their first state title in 32 years.

The win was number 199 for Biles while at Lorena. In his 30th year as Lorena’s head coach, he now will have the opportunity to win game number 200 on Thursday Dec. 16 at 3:00 against Brock in the 3A Division I State Title Game.

On the field, the Lorena ground game led the way on the night as the Leopards’ vaunted one-two punch gave Lago Vista all kinds of problems. Reed Michna rushed for 111 yards in the first half before leaving the game due to injury. His counterpart Rhett Hanson stepped up in his absence, rushing for 199 yards and four touchdowns on 17 carries.

“We’re blessed to have two good backs like that,” Biles said. “Rhett’s a monster. The guy plays so hard. He’s extremely physical. I’m not at all surprised. That’s the kind of kid he is.”

But despite Lorena’s dominance on the night, Lago Vista got off to a dream start.

On an early Viking punt, Braden Smith forced the Lorena return man to fumble, and Jaden Hester recovered at the Lorena three-yard line for the Vikings. On the next play, David Garcia barreled in from three yards out and Lago Vista had a 7-0 lead five minutes in.

However, the momentum didn’t last long for the Vikings much to their disappointment.

“We were just kind of up against a buzzsaw tonight,” Lago Vista head coach Craten Phillips said. “[Lorena’s] team speed was just a lot. It was something we struggled to overcome tonight.”

Hanson went untouched for a 75-yard touchdown on the very next play after the Lago Vista touchdown. It was the first of four consecutive rushing touchdowns by the Leopards as Hanson added three and 13-yard rushing touchdowns and Michna found paydirt from one yard out to extend Lorena’s lead to 28-7 midway through the second quarter. 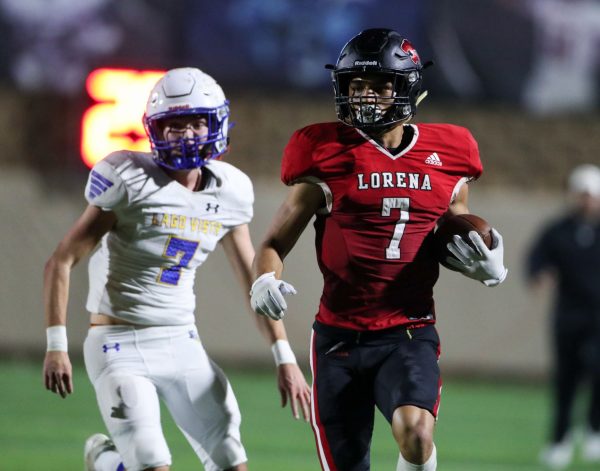 Jadon Porter (7) added a 61-yard touchdown for Lorena late in the first half. Credit: Scott Coleman

And while the Leopard rushing game stole the headlines, defensive lineman Joe Gutshall was giving the Lago Vista offense nightmares. He sacked Lago Vista quarterback Bowen Stobb on fourth down on one drive before intercepting him on the next one.

Lorena quarterback Ryne Abel got in on the fun after that as he connected with Khi Ritchie and Jadon Porter for touchdowns of 13 and 61 yards.

Biles was especially proud of his quarterback, who ended the night with 143 yards passing and two touchdowns, all in the first half.

Stobb did rush for a 35-yard touchdown in between Abel’s two touchdowns to cut the halftime deficit to 42-14, but Lago Vista’s offense struggled to get much going on the night.

Stobb would finish with 89 yards passing and 87 rushing yards, while star Viking running back Logan Parsons was limited to just 64 yards on the ground.

And although Lago Vista kicker Marlon Gavarette nailed a 40-yard field goal for the Vikings in the third quarter, the second half belonged to Lorena just as much as the first. Hanson scored on a 64-yard touchdown run, while Kasen Taylor added some icing on the cake with a late touchdown scamper.

Despite the lopsided defeat, Phillips was extremely proud of what his team achieved during its 10-4 season as the Vikings earned their first state semifinal trip since 2010.

“This is a fantastic group of kids,” Phillips said. “Anybody that knows them and their competitive nature would understand how much we as a coaching staff absolutely love these kids and appreciate getting to go to battle with them each week because we know the effort they’re going to give us.”

And as Lorena celebrated its first state title game berth since 1989, Biles wanted to make sure all the attention was not on him but on the hard work and accomplishments of his team instead.

“These guys have worked so hard for so long to get where they are now, and we’re just excited about the opportunity,” Biles said. “The support we get from all these people here is awesome. We’re just going to enjoy the night and then get back to work tomorrow.”

Vote for the Six-Man Player of the Year Here