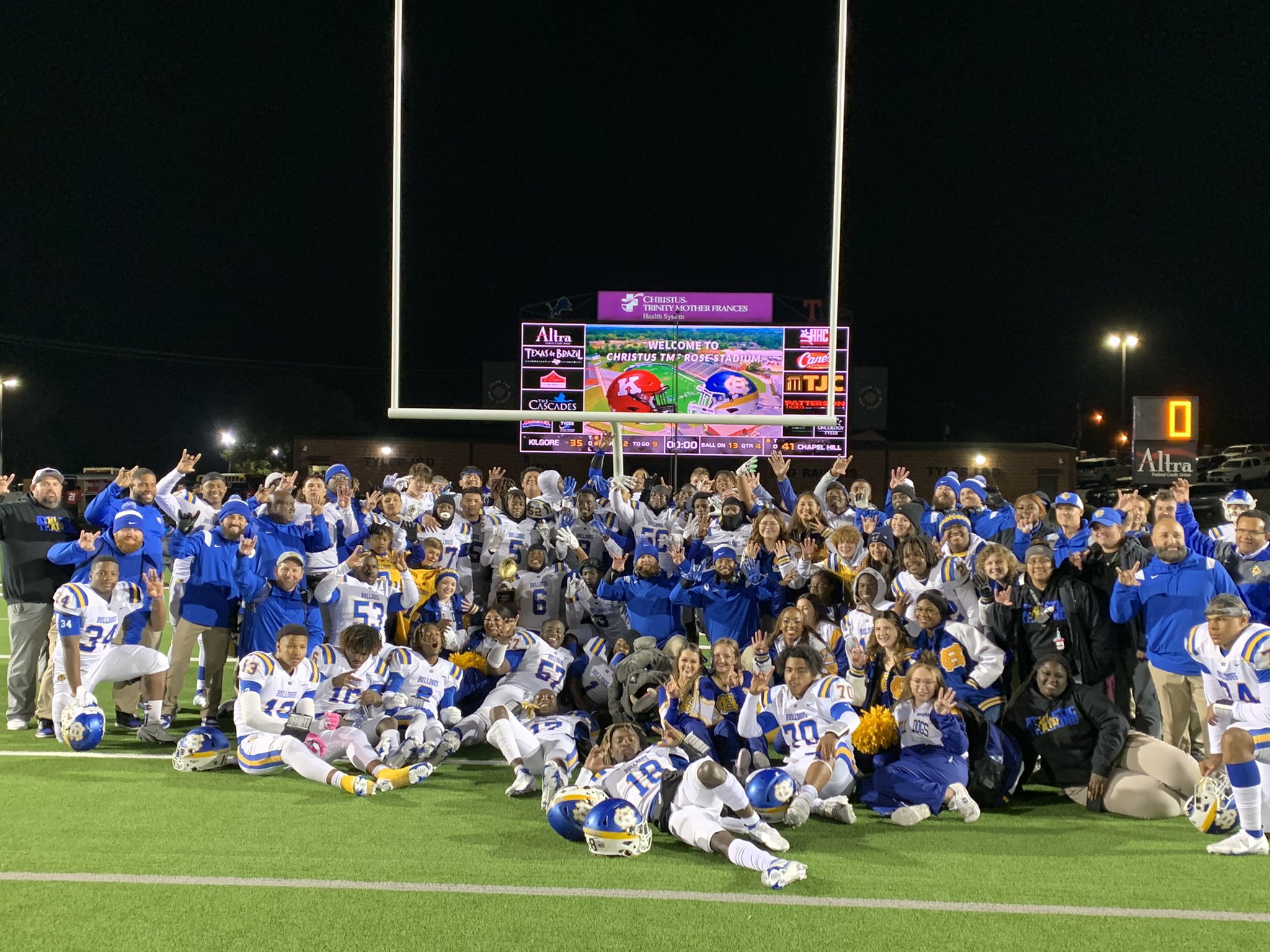 That’s all that stood between Tyler Chapel Hill and its first appearance in a state title game in 10 years.

Instead, a seven-yard touchdown pass from LBJ quarterback Oscar Gordon III to his receiver Noah Baker denied Chapel Hill that chance to play for the 4A Division I State Championship as the Jaguars secured a 38-35 victory in the state semifinals.

Despite, the heartbreaking ending to the 2021 season for the Bulldogs, Chapel Hill head coach Jeff Riordan said his program is ahead of schedule following an 11-4 record in just his third year in charge.

“Looking back on last season, a lot to be proud of (and) a lot to be excited about in the future,” Riordan said. “Got a lot of experience. A lot of confidence, but our kids need to know that we have a target on our back now.” 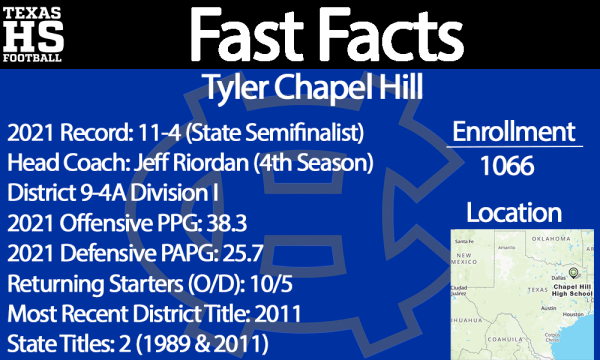 That target on the back of the Bulldogs is well-deserved considering the progress they have made in just three years. Following a 2-8 record in Riordan’s first season, the Bulldogs have now made runs to the third round of playoffs and the state semifinals the past two seasons.

“I told those kids that just graduated as seniors — it was spring semester of their freshman year when I got here — those that stay and make it through this will be champions,” Riordan said. “And that senior class got to be bi-district champs, area champs, regional champs, and make a state semifinal appearance.”

You left your Legacy and set the Standard for those to come! I Love you all and I am one proud Coach! Take Code Blue and Go Be Great!

“Those that stay, will be Champions!”

Last year, the Bulldogs averaged 38.3 points per game on offense and punted just 22 times in their 15 games. Even more frightening for opponents is the fact that the Bulldogs have 10 starters from that offense returning this season.

That includes quarterback Demetrius Brisbon Jr. (1,001 passing yards, 1,357 rushing yards, and 27 total touchdowns in 2021) and running back Rickey Stewart (981 rushing yards), who each had breakout seasons last year as freshmen.

“Demetrius and Rickey are two special players,” Riordan said. “Great kids. Great leaders, mature beyond their years. (But) you know, they had a great supporting cast as freshmen to come in there and do what they did. Speaks volume to the kids they had around them.”

Out at receiver, the Bulldogs have two veterans leading the way in seniors Deuce McGregor (969 receiving yards) and San Diego State commit Tyson Berry (850 receiving yards) who have both started on varsity since their freshmen years.

In the trenches, four of Chapel Hill’s five offensive linemen are also back, including right tackle Dyllan Drummond, right guard Pablo Martinez, and left guard Corey Johnson, who Riordan said is “physical and nasty” in the trenches.

With the number of experienced players back on offense for the Bulldogs, Riordan is excited to see what the unit can accomplish.

“Anytime you can have ten coming back on offense to an offense that was already explosive, it just speaks volumes to what we’re going to be able to do next year,” Riordan said.

The defense is a different story as the Bulldogs must replace eight of their nine leading tacklers from a year ago.

Riordan said Da’Veon Ross will get the start at middle linebacker and is a special athlete that can run sideline to sideline for the Bulldogs. Daniel Waddleton (109 total tackles) will slot in alongside Ross at the linebacker position after a big 2021 season.

Up front, Riordan expects junior defensive tackle Kendall Allen to be a physical presence on the line for the Bulldogs alongside defensive end Keviyan Huddleston, another player who will have been a four-year starter for the Bulldogs.

In the secondary, there are several players Riordan has high hopes for. Senior Drew Harmon started every game at corner last year, while Jayvin Mayfield contributed as a sophomore last year and is expected to be an impact player this season. Ja’Tyrin Mumphrey is a “strong, fast kid that’s physical,” who Riordan believes will have a breakout season, while McGregor is also expected to see some snaps on that side of the ball.

“We have some holes to fill on defense, but I think we’ll be alright,” Riordan said. “We’ve got kids that can run around in there that are very physical.”

The Bulldogs will need each one of the players Riordan mentioned for the slugfest that every District 9-4A Division I game will be. The past two seasons, Chapel Hill has finished fourth in its district before advancing to play one of its district opponents in the third round. In 2020, Lindale got the better of the Bulldogs 36-7, but last season, Chapel Hill edged Kilgore in a 41-35 Double OT thriller en route to the state semifinals.

Riordan said he expects nothing less of the district this year.

“It shows you proof of the strength of our district when in the third round, you look up and you’re playing your district,” Riordan said. “I look for Lindale, Kilgore, [and] us making noise. Whoever gets hot at the right time and whoever stays the healthiest will probably have a chance to represent our district in the state championship.”

And after the heartbreak of last season, the Bulldogs have been fueled by the motto #Unfin16hedBusiness as they look to get one step further and play a 16th game this season: the 4A Division I State Title Game at Cowboys Stadium.

Current Off Season Leader board! Very impressed and proud of our 2022 Off-Season efforts! #PlusOne is part of our #UNFIN16SHEDBUSINESS and those #9Seconds are in our grasp! #WeGotDogs pic.twitter.com/vFOK8g3tnb