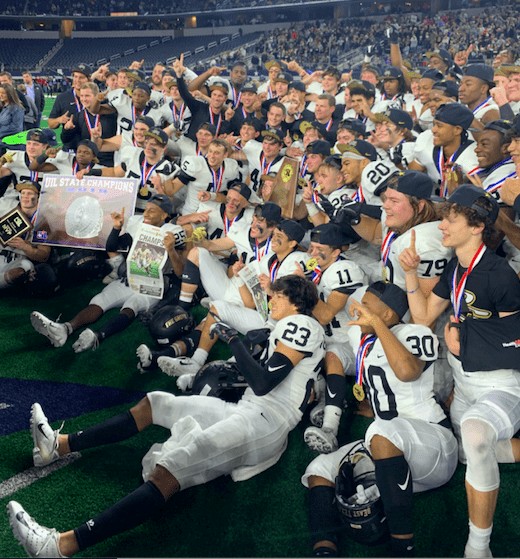 Senior Running Back Bruce Garrett etched his name in the Texas State Football Championship record books with what might be the best single player performance this weekend.

Garrett ran for 254 yards which puts him 3rd all time for rushing yards in a game behind 290 yards for Cedar Hills William Cole in 2006 and Katy’s Adam Taylor’s 277 yards in 2012 against the Cedar Hill Longhorns.

The Hawks started fast with an 85 yard kick return touchdown for Senior KJ Hicks to open the game.  Hicks added 88 yards to the teams rushing total on 19 carries.  After both teams both teams traded touchdowns to make it 14-14 after the 1st the Texarkana defense settle down and took over the game from that point on, making it difficult for the Wimberley offense to move the ball consistently.

Quarterback Cooper McCullum was 13 of 30 for 215 yards and 2 touchdowns and an interception, but with them going only 4 for 12 on 3rd down conversions as well as allowing 3 sacks the Texans were behind the eight ball for what felt like the entire game.

This marks the second state championship for Pleasant Grove and the third time in a row playing in the title game.  The first coming in 2017 with a 41-21 win over West Orange Stark.  Last year they took a 40-28 loss to Cuero High team led by now University of Texas Running back Jordan Whittington’s 6 touchdown performance.

Last years loss seemed to fuel the fire for the Hawks, especially for Garrett who’s hard nose running and tackle breaking gashed the Wiberley defense for the entire game as he was named Offensive Most Valuable Player.