Football is back in Texas, finally. After a long and winding road of uncertainty and precautions amidst the COVID-19 pandemic, teams in conferences 1A-4A will kick off their seasons this weekend.

As always, the opening weeks of the season bring plenty of intriguing non-district matchups. Here are some of the top games from across the state and all four conferences to keep an eye on in week 1.

These two schools, separated by over 350 miles, will meet in Gordon on Thursday night in a highly anticipated showdown with both teams ranked third in their respective divisions (Borden County in 1A Division I and Calvert in 1A Division II), according to sixman.com. Both teams are led by experienced quarterbacks as the Coyotes return Trey Edwards, 1,219 passing yards last season, while last year’s District 14-1A Division II Offensive MVP Ja’Quarious Ford is back for the Trojans. Ford will have Billy Thompson, who plays both ways as a receiver and linebacker, at his disposal in the passing game, while Edwards is joined in the backfield by last season’s District 6-1A Division I Offensive MVP and two-way star Tommy Kingston, 1,980 rushing yards and 811 passing yards in 2019 offensively and 141 tackles defensively. There is also plenty of star power on defense for both teams. The Coyotes are led by Kingston and District 6-1A Division I Defensive MVP linebacker Mason Cole, 139 tackles on defense and 703 rushing yards offensively, while the Trojans are anchored by last year’s District 14-1A Division II Defensive MVP cornerback Davien Flentroy. With two talented quarterbacks and plenty of firepower on both sides of the ball set to take the field on Thursday, this game should be a good test for both Calvert and Borden County to see how they match up against a fellow state contender.

This game sees two of the best six-man programs in the state square off in what should be an intriguing contest. They were district opponents in the previous alignment and split their two previous meetings at one game apiece. Balmorhea won 46-0 in 2018, while Rankin got their revenge last season in a 68-44 victory last season. This year look for De’shon Goodley, 1,218 passing yards and 2,295 rushing yards a year ago, utility player Braxton Kirkland, 431 rushing yards and 561 receiving yards, and WR Ben Rios, 1,258 receiving yards in 2019, to lead a high-powered Red Devil offense that averaged 67 points per game a year ago. The Bears have plenty of talent of their own to go blow for blow with this talented Red Devils squad as FB/S Lane Carrasco, a ballhawk on defense, RB Angel Iniguez, and WR Isaiah Valerio all return after playing impact roles last season. With two state title contenders opening the year against each other, it should be a mouthwatering contest under the lights in Rankin.

These two teams have squared off the past four seasons, splitting the contests at two apiece. This year, the game could very well turn into a battle of the Brooks. The Brahmas are led by Texas commit running back Jonathon Brooks, 1,310 rushing yards a year ago, while DT/RB Doug Brooks, 836 rushing yards and 13 touchdowns in addition to earning District 15-2A Division I Defensive MVP last year, will start both ways for the Comanches. Jonathon Brooks and receiver/defensive back Ty Gerke, who was a first-team all-district selection at both positions last year, will need to be at their best as they square off against a Shiner offense that averaged nearly 56 points per game a season ago. That vaunted Comanche offense will be led by a three-headed monster in the backfield consisting of Doug Brooks, fellow running back Zane Rhodes, and quarterback Tyler Palmer, all of whom were first-team all-district selections a year ago. This game has all the makings of an offensive showdown and should be a barnburner to open the season in Shiner.

These teams will square off for the third consecutive season on Friday night. Grandview has won the three prior meetings, including a 35-21 victory in the 2018 3A Division I state championship game. The quarterback position is one to watch in this game as Grandview’s Dane Jentsch, last year’s 3A Offensive Player of the Year, and Malakoff’s Darion Peace, a three-year starter for the Tigers, will face off yet again. At the skill positions for Malakoff, look for WR/TE Nathan Jones, a first-team all-district selection last year, to be an impact player in the passing game. However, in order for the Tigers offense to succeed, they will have to contain the most highly touted player on the field Friday night, Grandview’s DE/TE Dametrious Crownover, who has 26 Division I offers and is a threat on both sides of the ball. Malakoff will be hoping that the fourth time is the charm as it looks to tame these high-flying Zebras under the lights on Friday night.

After falling to Wall each of the last four years, Eastland will be out for revenge on Friday night. Leading the way for the Mavericks will be Texas Tech commit quarterback Behren Morton, who threw for 2,521 yards and 29 touchdowns a year ago. Morton also has his leading rusher back in Brandon Fielding, 1,032 rushing yards, and 11 touchdowns in 2019. Keep an eye on Wall’s run game as well in their flexbone offense with Chase Rios, 759 rushing yards, leading the running backs and Baylor commit tackle Tate Williams, an all-state selection last year, anchoring the offensive line.  The most important player on the field on Friday night though could very well be Wall’s Drew Morrison because of his impact on both sides of the ball. In addition to leading the team defensively with 113 tackles from his linebacker position, he also stepped in at quarterback late last season, rushing for 489 yards while passing for 158 yards. The dual between Morrison and Morton will be the storyline to watch on Friday night as whoever has the better game could be the deciding factor as to which team ends up on the right side of the scoreboard on Friday night.

If you like offense then this a game for you as Decatur averaged 48.5 points per game last year, while Argyle put up 51.9 points per game. Watch for a trio of talented skill players for Argyle on offense to play a key role in this one. Running back Tito Bryce, 822 rushing yards last season, receiver Cole Kirkpatrick, 1,688 receiving yards in 2019, and tight end Jasper Lott, 222 receiving yards and seven touchdowns in 2019, are all back and will look to cause problems for the Decatur defense. Decatur is replacing a lot of its offensive production from last year after graduations, but David Juarez, 507 receiving yards last year, is back to be a reliable target in the passing game. This means the Decatur defense could be key in this game as they try to shut down Argyle’s high-flying attack. Look for safety Jackson Carroll, 156 total tackles in 2019, and linebackers Landry Phipps, 124 total tackles, and Max Downe, 126 total tackles, to make plays throughout the night on Friday as all three are coming off impressive seasons where they earned first team all-district honors. With both teams coming off undefeated regular seasons, expect a fun game with plenty of offensive fireworks as these two teams look to start off their seasons on the right foot.

The third time was the charm for Waco La Vega when it came to finding a week one opponent. After having two previously scheduled week one contests canceled, the Pirates finally got a matchup scheduled against the Sandcrabs, who lost their own week one game when Geronimo Navarro had to cancel due to positive COVID-19 tests. Both teams boast prolific rushing attacks. The Sandcrabs are led by seniors Steve Johnson, 2,296 rushing yards in 2019, and Jarius Stewart, 779 rushing yards a year ago, while the Pirates have Jar’Quae Walton, a first-team all-district selection last season, and Northwestern State commit quarterback Ara Rauls, who starred in the secondary last season, to lead their offensive attack. Defensively, LaTravius Johnson, 195 tackles and first-team all-state honors last year, will look to shutdown Calhoun’s run game, while the Sandcrabs will be hoping for big things out of defensive back Adrian Chambers after he racked up 65 tackles and earned first-team honors as a sophomore last year. Expect a lot of action on the ground on Friday night as both teams look to gain some momentum with an opening game victory.

Additional reading: Here is how Hurricane Laura has affected week one games in East Texas:https://texashsfootball.com/hurricane-marco-hurricane-laura-cancel-high-school-games/ 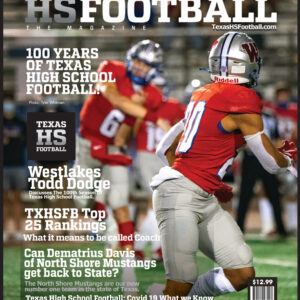 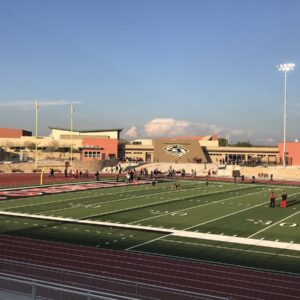 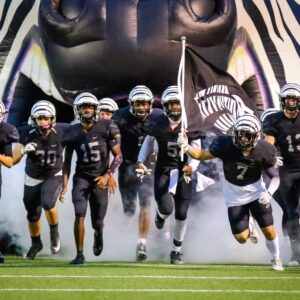 Top 10 Moments from Week One of Texas High School Football 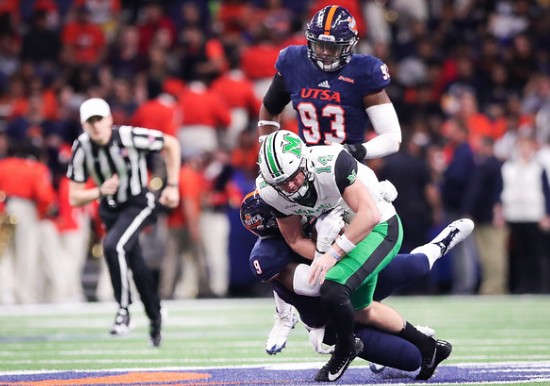 Marcus Davenport, Your Conference USA Defensive Player Of The Year